Well, I have returned from Nashville sans dress with rhinestones. There just wasn’t time. I guess I’ll have to break out my bedazzler and make myself my own dadgum dress with sparkly roses. And, yes, I said dadgum because it’s what Loretta Lynn would do. WWLLD. Perhaps I will start a whole movement.

Anyway, Nashville was so much fun. I’ve only been there a handful of times but it has quickly become one of my favorite cities ever. Don’t get me wrong, we are all TEXAS FOREVER (more on that in a moment) at our house, but I do think Tennessee is absolutely beautiful. Sophie and I spent a large majority of Friday being filmed while riding around in a van and if that sentence doesn’t kind of make you want to come to the .Mom Conference in September then I don’t know what will.

Not coincidentally, Friday is also the day I officially ruled out PROFESSIONAL ACTRESS as a career option because you know what I struggle with? The ability to pretend I’m surprised or frightened or to cry on demand. Even though I used to be very good at crying on demand between the ages of 13-21. I was a real treat back then.

But the best part of the trip was getting to hang out with some friends on Friday night after all the filming was over. We laughed until we cried and then we started all over again. My friend Kelly made homemade pasta (like real pasta from scratch that she made with dough and a Kitchenaid) that changed my life. My only regret is that I neglected to get a picture of the pasta hanging on plastic coat hangers all over her kitchen. It made me so happy. Good times. 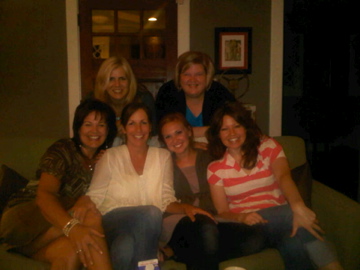 Could the lighting in that picture be any worse?

No. I didn’t think so either.

I flew out early on Saturday morning and was happy to get home to my people. P texted me a picture of Caroline on Friday night while they were eating dinner and on their way to a movie. 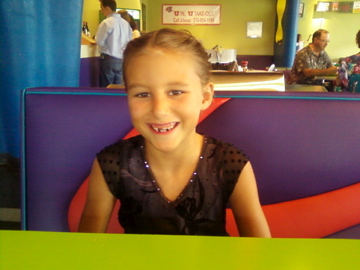 I had three thoughts:

1. When did my baby start to look so pretty and grown up?
2. How can she eat a hamburger while missing that many teeth?
3. Why is she wearing a dress made out of black velvet in July?

Needless to say, I missed them terribly and was glad to be home. They entertained me for approximately one hour and six minutes before announcing they were heading to the Alamodome for the Texas Trophy Hunters Extravaganza. Key word: EXTRAVAGANZA. Not just a convention or a meeting or a show. AN EXTRAVAGANZA.

So as soon as they walked out the back door, I ran to the DVR to watch the series finale of Friday Night Lights. ****SPOILER ALERT*****

And I SOBBED when Coach found Tami at the mall and told her to take the job in Philadelphia.

(I am not kidding when I tell you I haven’t cried that much at some sort of entertainment since I made the mistake of watching Marley and Me and couldn’t pull myself together for thirty minutes after it ended. P told me he didn’t understand why a person would put themselves through that kind of emotional wringer.)

I really thought I’d be disappointed if they didn’t end up in Texas, but it totally worked and felt right. Coach needed to get out of Dillon and have a fresh start. Tami needed the chance to live out her dream. And Tim Riggins? Well, he needed to drink a beer with Billy while they built a house on his land. TEXAS FOREVER.

If you watched it, I’d love to hear what you thought or what your favorite part was and if you think it’s normal that I had to go through half a box of Kleenex before it was all over and will miss Coach and Tami like they’re my favorite next door neighbors who just moved to Philadelphia.

P and Caroline made it home from the Texas Trophy Hunters Extravaganza and I was forever grateful that they brought home some of those cinnamon pecans because they’re my favorite. And then we picked up Italian food for dinner and spent the rest of the night just hanging out.

Sunday morning we went to church and then came home to watch the U.S. Women’s team play for the World Cup. In case you don’t know how it turned out, they lost. They lost during the penalty kicks and, personally, I think penalty kicks are a dumb way to end a game. You wouldn’t end a basketball game with free throws. But FIFA didn’t ask for my opinion.

I’ll just take comfort in knowing they didn’t lose due to a lack of patriotic soccer spirit at our house. 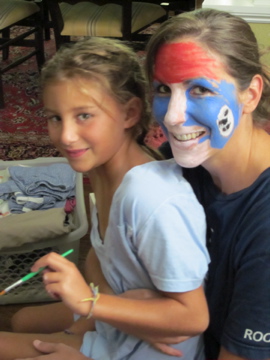 Yes. I let Caroline paint my face red, white and blue with a soccer ball on my cheek. I don’t know why. The World Cup enthusiasm got to me. Plus, it kept her entertained for at least thirty minutes.

All I know is I bet the girls would have won that game if Coach Taylor had been their coach.

Oh, and if you need me tomorrow I’ll just be here trying to get the red paint out of my eyebrows.

Fashion Friday: Edition laziest one ever

We hit the road, Jack