You are here: Home / Another day / Walking to the future

Okay, so I have some news.

And it’s news that I’ve been wanting to share for about the last six months but haven’t been able to for a variety of reasons, many of which involve my fear of putting myself out there and facing potential rejection.

But first I’m going to tell you the shortest version I can manage of the whole story. If you’ve been reading my blog for any length of time you know this would be a good time to get comfortable, maybe grab a pillow and some caffeine. Because, MY WORD, at the wordiness. Especially when I’m trying to find all the right words.

Three years ago (Do you see now why you might want a pillow? You’re probably thinking CUT TO THE CHASE, NANCY.) I went to a conference called She Speaks. The official reason I went was to teach a little course on blogging, which in and of itself is hilarious, but when Lysa Terkeurst invited me she mentioned it might be a great chance to put together a book proposal and meet with some literary agent/publisher type people. I wasn’t sure how I felt about the whole thing and had no idea how to translate my unique ability to write about nothing into some type of book format, but I decided I’d give it a whirl and came up with a proposal.

While I was there I met with an agent named Bill Jensen and liked him immediately. He promised to look over my proposal and said he’d try to get back to me in a few weeks. Then I met with a publisher who let me know she wasn’t interested. AT ALL.

Thank you. I will just go curl up in the fetal position and cry now.

And so I decided to let the whole book thing go. Until several months later when I received an email from Bill Jensen asking if I wanted to talk to him on the phone. So we talked. And then we talked some more. And then I kind of freaked out and felt overwhelmed by the whole thing and sent him what I hoped was a very nice email thanking him for his time but explaining that I was slightly neurotic and completely incapable of thinking about writing a book.

I’m a blogger. I blog. That’s what I do. And it allows me to talk about the kind of chips I bought at the grocery store and the cute shirt I found on sale at Anthropologie and I think we all know that Jane Austen never wrote a book about any of those things.

Of course Jane Austen also wrote fiction and I don’t do fiction because I prefer real life. She also wore petticoats. And probably wore her hair in a bun.

But over the last three years, the book thing (as I refer to it) has been the thing that God has not allowed me to let go of. I’ve gone through months where I’ve hardly thought about it at all, but then have had other days where the weight of it sat on me so heavy that it was like I’d forgotten to do something really important, like pick Caroline up from school or record Rachel Zoe on the DVR.

It’s just been there. Hanging out there. Like a big matzo ball.

Then I went to the Deeper Still Conference in Birmingham last December (You should feel thankful that I just fast-forwarded you through three years of tears and agony and conflict. It’s been like an episode of Dynasty in my head.) and that Saturday night went to a Compassion Bloggers’ reunion dinner. I had the opportunity to meet Ann Voskamp in person for the first time. Ann and I talked for a few minutes and she was every bit as wonderful as I knew she would be and then she asked, “Whatever happened to that book you were going to write?”

Dang. Ann Voskamp just softly dropped a hammer on me and she had no idea.

It took everything in me not to just put my head in her lap and cry, but instead I think I said something eloquent like “I don’t know”. And then she encouraged me to write in the way that only Ann Voskamp can encourage you. I will be forever grateful to her for that.

So I began to pray about the book thing and around mid-January I just knew I was supposed to email Bill Jensen and ask if he still had any interest in working with me. And I kind of told God that if I didn’t hear from Bill then I was going to drop the whole thing. Because, yes, I’m in charge.

Two months later I hadn’t heard a word back from Bill and I began to wonder if I’d said something in my email to offend him. I searched my sent items folder for the email and quickly discovered I’d sent it to the wrong email address because I’m an idiot who can’t be trusted with responsibility. So I re-sent the email and, I KID YOU NOT, five minutes later I had an email from Bill in my inbox asking when I’d like to talk on the phone.

And I think God was up in heaven kind of laughing at me.

Over the next few months, Bill helped me put a book proposal together and answered all 82,132 questions I had about the entire process. I spent weeks upon weeks at Starbucks typing my little heart out until the smell of coffee began to make me feel like I might have a seizure.

But here’s the moment in the whole thing that I will never forget as long as I live. About a week before we sent out the proposal, Bill and I were talking on the phone. It was mid-August and Caroline was sitting in the back seat, waiting on me to finish my conversation so we could go into Subway and order some truly mediocre sandwiches.

After I hung up the phone I said, “Babe, thanks for being so patient. That was an important call about the book.”

“It has taken you a really long time to write a book.”

Since I’m never one to miss a teachable moment outside of Subway, I replied “Yes it has. But you know what? Sometimes in life the things we have to wait on the longest or work the hardest for turn out to be the sweetest things in the end.”

And then she said something that I know was God speaking through her right to my heart.

“Mama? Sometimes we have to walk to our future even when it feels like we want to run.”

Dang. My own daughter. Where did that wisdom come from? Whose kid is that? Is that one of Ann Voskamp’s kids in my back seat?

It was all I could do to not break down and cry right then. Because it has been a journey and the book has been a dream I’ve had somewhere deep down for as long as I can remember.

The proposal went out about a week later and I held my breath and told myself it didn’t matter one way or the other, that I had done what I felt like God had called me to do and the rest was up to Him. Honestly, I half-expected that maybe someone would offer to let me pay them $10 to get it bound at Kinko’s and sell it out of their garage.

But that’s not what happened.

When I got home from the airport on Sunday afternoon, I saw that this had come in the mail while I was gone. 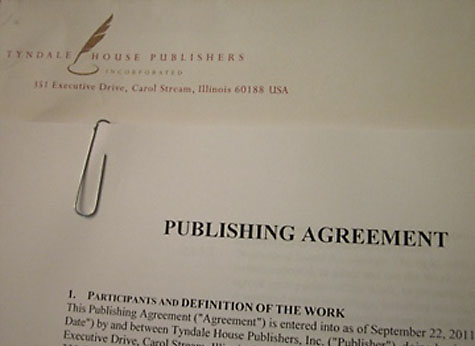 That’s my official contract from Tyndale House Publishers. They’re going to publish my first (last? only?) book tentatively titled Sparkly Green Earrings. It’s going to be a memoir-ish type book about family and God and motherhood.

And now I have until April 1, 2012 to finish writing it. Which means if you need to find me I’ll be the one in the corner chair at Starbucks hyperventilating and typing furiously.

I’m excited. I’m overwhelmed. And I’m a little scared. But I am beyond grateful for those of you who show up here every day and encourage me so much. I am not kidding even a little bit when I say that none of this would have happened without you.

In which I am overwhelmed