You are here: Home / Just for fun / Someone help me, help me please

Okay, so I have been at war with myself over whether or not to write this post. But the part of me that cares about what people think has lost the battle. I am compelled to share something with the world wide web that is causing me to swallow my pride.

Put your hands in the air if you watched (and loved) The Osmond Family on Oprah last Friday.

I wanted to think that I was above Osmondmania. In fact, I almost deleted the entire show off my DVR. But the kind hand of television fate intervened, and since P had taken Caroline to the ranch for the whole day on Sunday and I had time on my hands, I decided to go ahead and watch the first few minutes just to see how The Osmonds were holding up.

Oh, pride goeth before a fall.

I have prided myself that I have been above watching Marie on “Dancing With The Stars”, even after hearing she passed out cold on national television. And, really, that’s just good T.V.

I have even scoffed at Marie selling her dolls on QVC because, really, the whole doll collection thing is just beyond my realm of comprehension.

Please don’t be offended if you collect dolls. That’s great. I’m just saying that they kind of creep me out. I’m not proud of the fact that I still have to remove all the dolls from the room I sleep in when I visit my Nanny. It’s just who I am.

I’m a big coward who is afraid of glass eyes that stare off into space and heads topped with unnaturally flipped hair with jaunty berets on top.

Anyway, The Osmonds. I’m fascinated. There were like over 632 of them on Oprah’s stage and not one of them has an immediate family of less than 26 children or something like that. And they all look alike. And they all have perpetual smiles.

And I am afraid I am going to be tempted to shell out big bucks to attend The Osmond Family Reunion Tour.

I know. I’m frightening even myself.

Oh, I pretend to be above it all, but I AM NOT. I am a weak vessel given to waves of 70’s nostalgia.

After all, Donny Osmond was really my first love.

I would spend Friday nights not more than 5 inches away from our huge console television because I believed Donny could see me watching him while I wore my purple socks. I felt connected to him because I understood his love of purple socks and I, too, believed I was a little bit rock-n-roll.

Sadly, this wouldn’t be the last time I would decide something was my favorite thing because it was also the favorite thing of the boy I liked. Hence, my great love of Dr. Pepper throughout my 7th and 8th grade years because of a guy named Kendall. I was sure our common bond of drinking Dr. Pepper would seal our joy for eternity. But then he moved out of town and I went back to drinking Coke, which at the time was Coke Classic because of a huge marketing blunder by the bigwigs at the Coca-Cola company.

I remember being heartbroken when I found out that Donny couldn’t actually see me through the T.V. screen. I just knew if he could see me he would be immediately smitten with the six year old girl in her Snoopy nightgown, missing her front tooth, re-enacting the entire “Donny and Marie Show” with her Donny and Marie dolls complete with soundstage set. 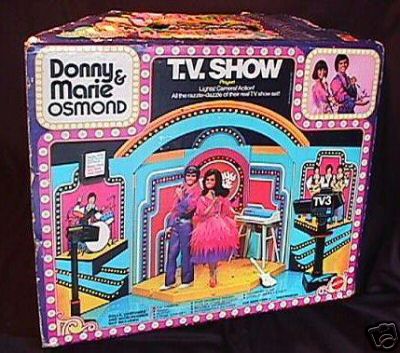 But then, Donny and I grew apart. His show went off the air, he got married, and I was over him. It was a tough transition but, eventually, Rick Springfield came along and I forgot all about Donny.

I believe it was 1988 when he came back on the scene with “Soldier of Love”.

Until now, I have never publicly admitted how much I liked that song, but I did. I may have even bought the cassette tape.

So, when I Donny and Marie opened the Oprah show with a medley of songs that was reminiscent of The Sweeney Sisters, I was ready to point and laugh with disdain. I was prepared to roll my eyes and ask no one in particular, who cares about The Osmonds anymore?

But then, Donny began singing “Puppy Love” and either I had allergies or I might have had a tear in my eye over what we used to have.

I’ll never tell which one it was.

Eat oatmeal, it’s the right thing to do