So. I believe I’ve mentioned that it’s Spring Break.

I know what you’re thinking. TELL ME MORE.

Gulley and I made plans a while back to take the kids to College Station for the first half of the week and so I spent last Friday getting ready to go out of town for five days. Specifically, I cleaned our toilets. I hate to make it all sound so glamorous, but it’s the truth.

I’ve just realized as I get older that I enjoy coming home to a clean house and so I did what I could to make sure that I wouldn’t feel like I had to spend the last half of our Spring Break cleaning the bathrooms. Instead I can concentrate on the much more luxurious pursuit of cleaning out our closets.

On Friday night we went out to eat with Mimi and Bops before leaving town the next day and then Saturday morning we slept in late and enjoyed the morning with P until it was time to pack up the car and drive over to Gulley’s house to meet up with her and the boys.

In an unfortunate turn of events, it was a horrible, rainy, foggy drive. And Gulley and I drove separate cars because Caroline and I were leaving College Station a day early to drive to Houston for the night. But the drive was made more entertaining by the fact that Caroline decided to use this time to grill me on every aspect of my entire life, including such topics as my childhood years, what I wish I’d done differently and how I met P. I told Gulley by the time we made it to Honey and Big’s house I felt like I’d been in a therapy session. Mainly because Caroline asked after everything I told her “…and how did that make you feel?”

I believe she has a bright future as either a psychologist or a daytime talk show host.

We were supposed to go watch the Aggies play baseball on Saturday, but please see the above reference to foggy and rainy. It was not a day made for baseball, so we just spent the evening catching up with Honey and Big.

But we did make it to the baseball game on Sunday afternoon even though the weather wasn’t much improved. We just bundled up, brought some blankets and made the best of it.

And later Sunday evening, we fulfilled a goal that Gulley and I have long held deep in our hearts. We brought back family game night. First we played a good round of Skip Bo and then we moved on to Family Trivial Pursuit.

(Gulley also brought a dice game she’d bought called Tenzi. We’ve had a lot of laughs over it because we’d texted the week before about all the things each of us would pack for Spring Break and Gulley texted, “I’ll bring TENSION!” And I replied, “Please don’t bring tension. It’s a vacation!” even though I knew she meant “Tenzi” and had been a victim of autocorrect.)

(That story is much funnier in person.)

(Or maybe not. Let’s just pretend like it is.)

Anyway, here’s something you need to know about me. I LOVE Trivial Pursuit. I do. I love it. I love all manner of trivia and, true confession, I may struggle with some pride issues over all the various trivia I know. It is also true that in college several of my friends referred to me as Cliff Claven because I have a tendency to share (some might say overshare) interesting things that I know.

It’s a bit of a sickness.

But what’s the use in knowing all those facts if you don’t tell someone about them? I mean, it’s not like I actually know anything that’s useful in day to day life. I just remember things like “What artist designed the Campbell’s Soup cans?” and “What was the name of the bar Archie Bunker owned in the spinoff from All in the Family?”

(The answers are Andy Warhol and Archie Bunker’s Place, which was also the name of the spinoff.)

We divided up in three teams for Trivial Pursuit. Gulley and Will, Honey and Jacks and Caroline and me. Honey and Jacks were actually winning, but Caroline and I apparently share a gene for trivia arrogance because Will whispered to Gulley, “I’m tired of listening to Mel and Caroline brag about all the things they know.” Which is why he laughed out loud a little too hard when Caroline missed a question about Jupiter’s moons and promptly got sent to his room for being a bad sport. Although he insisted later that he wasn’t laughing because we missed the question, but because he just thought it was hilarious that Jupiter has so many moons.

I’m sure that was it.

Also, Caroline and I are going to work really hard to tamp down our trivia enthusiasm. It seems the only thing to do if our Family Game Night renaissance is going to succeed.

In a bad turn of events, Will got sick later that night and Gulley ended up taking care of him until it was morning and they could get into a nearby med clinic. He ended up needing a breathing treatment and was basically diagnosed with a virus that just needs to run its course.

But since he and Gulley were exhausted, we ended up changing our plans for how we’d spend Monday. In all fairness, they weren’t really exciting plans to begin with but we had mentioned maybe going to see a movie and possibly even bowling.

Instead, I offered Caroline and Jackson a trip to the local Academy to look around (Yes. I mean the sporting goods store. Look for more travel tips in my upcoming brochure entitled “How to Give Your Kids an Awesome Spring Break”.) and then because we are just this out of control, we decided to also go to Aggieland Outfitters to look around because Jackson wanted a new A&M hat and Caroline wanted an Aggie soccer shirt. While we were there, they decided it might be fun to play a few rounds of air hockey in the store lobby. 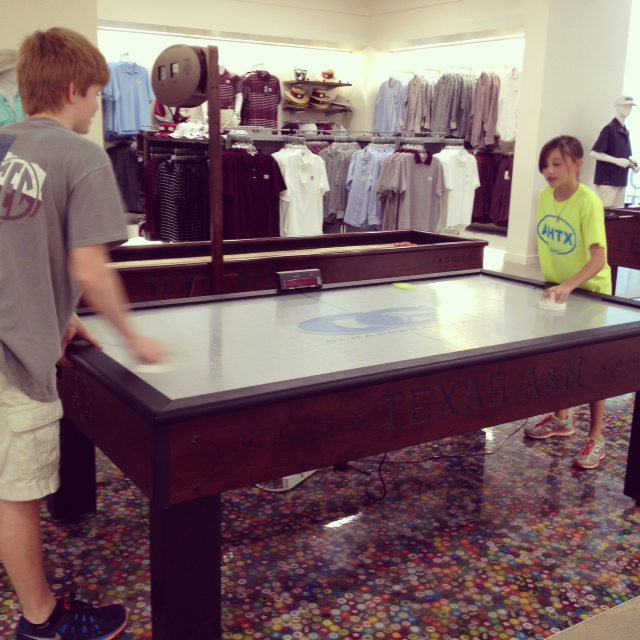 I took that picture, texted it to Gulley and said, “I feel that someday our kids will be reminiscing and say, ‘Remember how all our friends used to go skiing for Spring Break and our moms took us to play air hockey at Aggieland Outfitters?”

She replied, “Because their mothers are AWESOME!”

And also know a lot of trivia.

And now we are home