You are here: Home / People / Pork, it’s what’s for dinner

Last week, I mentioned that I had gone to dinner with my friend Hite and he had told me a story that left me with tears running down my cheeks and gasping for breath. I said I’d tell y’all about it as soon as he sent me some pictures to illustrate.

I am going to preface this story by telling y’all that there is absolutely no way that the written word can do this justice, but I’m going to give it my best shot.

My friend Jen lives just a few blocks away from Hite. We have all been friends since college and Jen and Hite hang out on an almost daily basis. Jen wasn’t available for dinner the other night because she is attending seminary, works almost full time, teaches 184 classes at her church, runs marathons and in her spare time goes on mission trips to Africa. She is what y’all might call a Type A personality. In fact, while we were roommates in college she would purposely wake me up at 8:00 a.m. because she felt I’d had enough sleep and needed to help her conquer the world. Amazingly enough, we are still friends.

Anyway, Jen has a lot of personality and never does anything halfway. You never have to wonder how she’s feeling about something because she will let you know, usually in a voice that isn’t necessarily an inside voice. In fact, she and Gulley have both been known to talk so loud that it has been suggested that they might have hearing problems.

Okay, so the week of Thanksgiving, Hite’s phone rings about 10:45 at night. It’s Jen and she is talking so fast and is so upset that he can’t even understand what she is saying. She tells him to get to her house right now. So, he jumps in the car and speeds over to her house fearing that something really bad has happened because she is so wound up.

He walks in the door and she is hysterical. He finally gets her to calm down long enough to find out that she walked out in the backyard about an hour before and saw some men in a truck stopped behind her house and when they saw her, they sped away. Then, about thirty minutes later she starts hearing some horrendous, loud noise coming from her backyard. She runs out to see what is going on and immediately notices the terrible smell.

In the meantime, her dog Willie has also run out to the backyard and is barking and going wild. She can’t get him to come into the house. Willie is no average dog. He already functions at a higher level of excitement than your normal canine. In fact, he has been known to get so excited that he has jumped through her plate glass window not once, but twice. Of course in the midst of all this chaos, he is beyond wound up.

Hite listens and hears all the commotion coming from the backyard. They go outside and he says the smell is just beyond awful and the noise is worse. He manages to get Willie back in the house and then goes to inspect the source of the noise. This is what he finds. 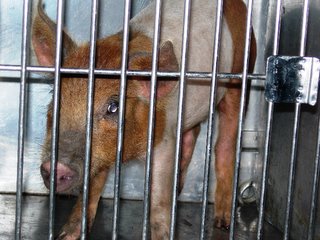 They are under Jen’s deck with slop and all. Hence, the smell…and the noise.

Just as they are trying to figure out the best course of action for renegade domestic pigs, six cop cars, a firetruck and an ambulance show up with sirens blazing in front of Jen’s house. It seems that before she called Hite, she called 911.

The police get out of the car with their electric tasers drawn and ready for action because as it turns out, Jen was so hysterical during her call to 911 that the operator taking the call coded her as crazy. Seriously.

I guess they figured anyone who lives in the heart of a major city who calls and hysterically suggests that some unknown perpertrators have placed something that appears to be livestock in their backyard has a high probability of being a little off.

Hite said the cops kept walking around saying “Bob, I’ve been on the force 18 years and never seen anything like this”. And then, “Carl, you ever seen pigs in someone’s backyard in this part of town?” They were stunned and weren’t sure about the next course of action.

They did volunteer that it was obviously either just a practical joke or someone had decided they no longer wanted those pigs, which they all agreed didn’t seem likely because why would someone drive to the middle of a city to drop off pigs in an upper middle class neighborhood.

How about those powers of deductive reasoning?

Jen said, “No one I know would do something like this”, but it seems that she was wrong. Apparently for some reason that I have forgotten, two of her friends from church had these pigs in their possession and had spent the week dropping them off in various church members’ backyards as a practical joke.

The next morning when they called to laugh and claim their pigs, the joke was on them because those pigs had been hauled off by animal control.

I’m not sure of their fate, but that night as Hite was telling me the story he had ordered the pulled pork and as he went to take a bite he said, “I hope this isn’t them”.

What can I do to get you in this car today?