You are here: Home / Friends / A story about a book

I was so happy to know that so many of y’all could embrace my decorating woes yesterday. I knew marriage was going to take some work along the way, but I had no idea that part of the deal was learning how to decorate around what used to be an 800 pound animal.

But today I am totally shifting gears. Of course I have to give you a little back story because that’s what I do.

Four score and seven years ago, I was facing my second senior year as a student at Texas A&M. It actually wasn’t quite that long ago, but it feels like it. Especially because I aged twenty years last night alone as I helped Caroline learn her lines for the second grade Christmas program.

Anyway, I was a lost soul during that time. I’d had my heart broken, called off an engagement, continued to chase after meaningless things I thought might make me happy, and spent enough time at bar called The Tap that I had my own VIP card. And was proud of it.

But life was starting to wear me down. I was tired, confused, lonely and walked around feeling empty most of the time even though I had plenty of friends and the occasional class to keep me occupied. Not to mention, I was terrified about the future because most companies aren’t really lining up to hire the girl who graduates while on scholastic probation and I hadn’t met the right boy to marry and solve all my problems.

Around that time, my friend Jennifer told me I needed to go with her to a Bible study called Breakaway. And it is a sign of how desperate I felt that I actually said yes and agreed to go. I walked into First Baptist College Station that night with low expectations. I’d grown up in church and had been really involved in my church youth group once upon a time, but I had fallen so far away from all that. Honestly, I felt like I was too far gone. God couldn’t possibly want me now.

We sat towards the back of the sanctuary and I remember two things as vividly as if they happened yesterday. The first was the minute the worship leader began to sing, I began to cry. Like ugly cry. The second thing was a young guy named Gregg Matte walked on stage and began to talk about how we are called to be children of God and to shine like stars in the universe.

(That happens to be in Phillipians 2, by the way.)

But more than that, he talked about grace and mercy and how God loves us more than we could ever imagine. I don’t know that it was the first time I’d ever really heard about God’s grace and love, but it was without a doubt the first time I really grabbed a hold of it and decided not to let go.

Over the next few months I actually became friends with Gregg and all of his friends. They were unlike any group I’d ever known. They talked openly about their faith and made decisions based on what they felt like God was calling them to do. I loved spending time with them because, without even knowing it, they challenged me to be the person God intended me to be and to quit settling for less.

By watching Gregg lead his life, I learned what it means to seek God’s will for your life. I’d heard people talk about it, but I’d never seen it in action. Especially not with someone my age. I knew Gregg had graduated with a degree in Marketing but decided to stay at A&M and continue to lead Breakaway Bible Study. And this was at a time when the economy was actually thriving and big firms were waltzing into the business school and offering what seemed like fat sums of money to starving twenty-two-year-old college students. I’m sure there were people that thought he was crazy for making the decision he did, but he knew it was his calling. Breakaway ended up growing to become the largest college Bible study in the nation and there is no way to measure how many lives it has affected.

And, ultimately, Gregg not only pointed me closer to Jesus. He pointed me to my dear husband who likes to hang antelopes in our living room. After I moved to San Antonio in the fall of ’94, he suggested that I should get in touch with P because we were both lonely and friendless. And that’s how he ended up being part of our wedding party almost three years later, just two weeks after P had been an usher in his.

Gregg Matte is now the head pastor of Houston’s First Baptist Church. He and his wife, Kelly, are dear friends to P and me even though our lives rarely allow us to ever see each other anymore. But they fall in that category of people you know are your people even when life is busy because they are the real deal. We have seen them live out their faith and face hard times and live with hearts that seek God with all that they have.

Which is part of why I am so excited to tell y’all that Gregg has written a book. 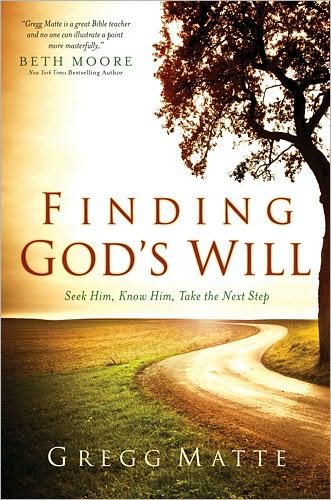 It’s called Finding God’s Will: Seek Him, Know Him, Take the Next Step. He sent me a copy right before Thanksgiving and it is just so good. He has always been one of the best storytellers and his voice rings out in this book. It’s such a great combination of personal stories combined with practical wisdom about how we can hear God in our lives and know where He’s leading us.

No matter where you are in your journey with God right now, Finding God’s Will has so much to offer. If you’ve walked with God for a long time, it will inspire you to seek Him more. If you’ve never known Him at all, it will show you who He is and what He’s created you for. It’s about living a life that matters, a life that says you want to make a difference, a life that God is calling you to, whether you’ve heard Him yet or not.

I cannot recommend it enough.

Finding God’s Will by Gregg Matte is on sale for $13.59 at Amazon right now.

My only regret for this post is that I can’t find the picture of Gregg fishing with P at the ranch about twenty years ago. I don’t know if the fish were biting, but there were plenty of mullets to be found.

Y’all have a great day.

Santa’s got his groove back