You are here: Home / Beauty / The life and times of my hair. The finale. For now.

Oh internet. I don’t know what has warmed my heart more in the last twenty-four hours, your unwavering support as I walked through a truly horrific hair past or knowing that apparently countless numbers of pre-adolescent girls were led to believe their mouths were shaped wrong to play the flute.

I have no doubt we were all victims of some vast conspiracy by band directors all over the United States to push the clarinet on poor, unwitting souls who just wanted to play the flute. This practice wasn’t just reserved for girls who wanted to play the flute, P was forced to play the baritone just because he was the only 6th grade boy strong enough to lug it home each day and his mama drove a station wagon.

I feel that all of us have been robbed of what could have been a limitless music future.

Also, many of you inquired about the arm injury in my cheerleading picture. Honestly, I have no idea how I acquired that particular injury but let me tell you that combing through the pictorial archives has revealed that my arm was in some sort of ace bandage in a large majority of pictures. I believe I was what you may call a hypochondriac.

And a drama queen.

I’d like to tell y’all a very dramatic story about a cheerleading pyramid that went awry and caused some sort of hairline fracture, but I’m pretty sure it would be fiction.

So, I guess now is where I have to move on to the high school and college years. I’ll be honest, it’s a little more painful to reveal some of these photos. Like I told Gulley this afternoon, I’m not sure I want to show y’all the Glamour Shot that I took after my freshman year in college. It just seems too recent.

Gulley made me feel much better by reminding me that anything that happened the summer after my freshman year in college may be embarrassing, but certainly can’t be considered recent.

I left off with a very poufy version of the bi-level cut in my 8th grade year. As I made my way to the new world of high school, I felt it was time for something a little edgier. A little more mature. A haircut worthy of some Olan Mills fine portraiture. 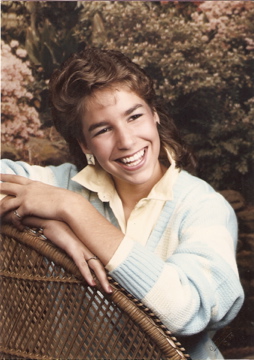 I’m not sure what all was going on with this hair, but I do know that, at the time, I thought my hair had never looked lovelier or more sophisticated. I also remember this was a Unionbay outfit with a matching butter yellow skirt. It was my most treasured possession along with my Guess overalls.

By tenth grade, I had enough wisdom to quit inflicting these terrible things upon my hair and let it grow out. I’m not sure why I can’t find any school pictures from my sophomore year, but here I am on my way to senior prom that year. 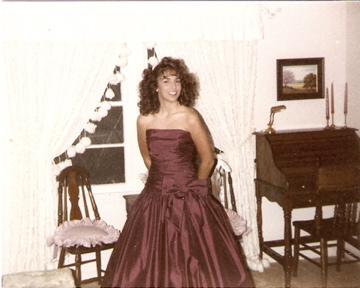 My attendance at this particular prom was fraught with drama. I had been through a recent, traumatic breakup with a boyfriend for reasons that were completely my fault and led to him dumping me as his prom date. Fortunately, a nice boy in my Spanish class asked me to prom, and my hair and I were able to attend. And my hair held up beautifully even though I cried in the bathroom when “Lady In Red” came on and I saw my ex-boyfriend dancing with his date.

I bet my date was so glad he had asked me to the prom on the heels of my recent breakup.

With my junior year came the advent of the spiral perm. 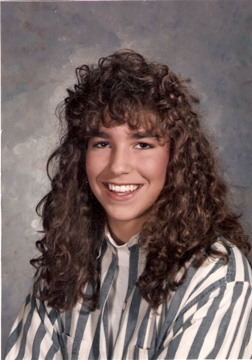 Oh to be able to go back in time and ask the hairdresser to please not perm my bangs even though the sixteen year old sitting in her chair thought it was a brilliant idea.

The fact that I am wearing green Z. Cavaricci’s with those Esprit boots that looked like they had wool socks coming out of the top doesn’t really make me look like any less like someone who might have performed with the band “Poison”.

Every rose has its thorns. And every hair on my head was permed.

By my senior year in high school I was on top of the world. To quote the Pink Ladies, “I was going to rule the school.”

Judging by this series of pictures, I was going to rule with a big piece of grosgrain ribbon serving as my crown. 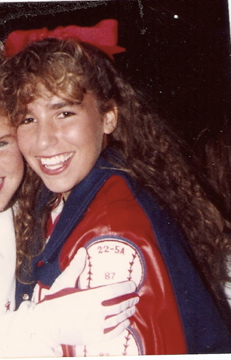 This is before I learned you should never wear white hose unless your name is followed by R.N. or you have an arterial blood flow problem.

At the end of senior year, it was time to document these precious moments in time with some senior pictures. 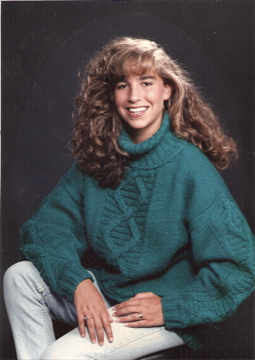 To this day my Nanny will still tell me that I’ve never looked more beautiful than I do in this picture and that I should still wear my hair like this. However, they no longer make sets of hot rollers with 52 individual rollers so it would be impossible to recreate this particular look. 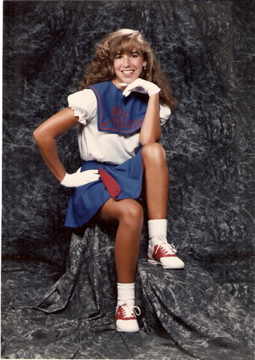 And I really have no reason to show y’all this picture other than the sweet, acid-washed background just tickled me to no end. I guess the photographer just thought it screamed “DANCE TEAM”.

After all the pomp and circumstance, I headed off to college. I left my high school days behind me but not my old friend, the permanent solution.

Sometimes I would roll it with my case of 52 hot rollers and it would look like this. 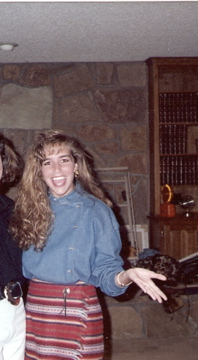 Is that a double-breasted denim shirt? Oh my. If I recall that skirt also had a matching jacket.

Because what looks better than horizontal stripes around your entire body?

And sometimes, for formal events I would pull it all back in some sort of updo. 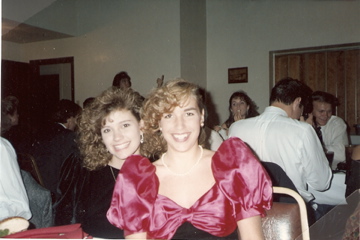 This is an historic picture because it is the night when Gulley and I became friends. We bonded over our terribly lame dates (mine wore a sweater vest). We also spent much of the evening debating what was bigger, her hair, my bangs or those sleeves on my dress.

The sleeves won, which is a monumental feat of fashion design.

But, eventually, all good things have to come to an end. However, I’ll be the first to admit that if the spiral perm were to make a comeback, I’d be first in line at the salon. I mean what other hairstyle affords you the ability to leave the house with wet hair covered in Aussie sprunch spray and call it a style?

As I continued my college career, I began to search for a more refined hairstyle. Something that really said, “I have no idea what I’m doing with my life or why my major is Speech Communications, but at least I look serious.”

So I tried this. 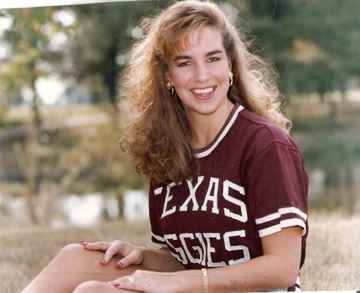 I think the gold Anne Klein doorknocker earrings really give the whole thing a sophisticated twist. As do the red, sculptured nails. Particularly the one that is taped on my thumb with scotch tape.

And then, in my fifth year of college I made a drastic move. 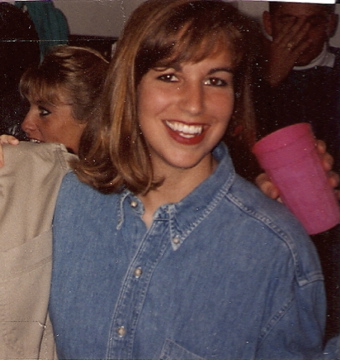 I own a briefcase and am hours away from having a college degree. Please hire me. I have very mature hair. Pay no attention to the fact that I am at a party where Jello shots are being served.

Eight months later I had graduated from college and found a job. I returned to A&M for Gulley’s graduation looking every bit the career minded woman. I had even used some sort of semi-permanent rinse to give myself auburn highlights. 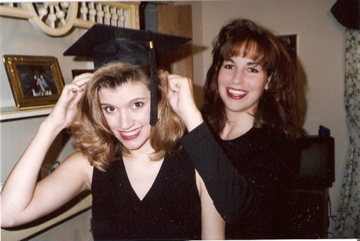 At this time I was working as a financial advisor. If I look like someone who gave you financial advice anytime from 1994-1996, you may want to re-evaluate your stock portfolio. In short, I had no idea what I was doing although my hair seemed to convey maturity and financial savvy.

After this time, my hair really settled down. Of course I had the Rachel cut from “Friends” because it was like some kind of law that every girl in her twenties had to have that cut. But for the most part, I just let my hair grow long and alternated between short layers, no layers, and long layers.

I’ve worn it stick straight, I’ve worn it curled, I’ve worn it twisted up in a clip for a good six months at a time. And I’ve worn it in a ponytail almost every day for the last four and a half years because who has time for all the blow-drying?

Here I am about six months ago. 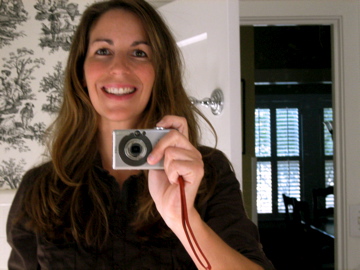 And here I am after I got nine inches cut off my hair last Friday. 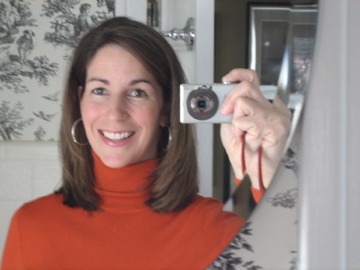 If there is a lesson here (other than don’t wear white hose and perm your bangs) its that hair does recover from trauma. My hair has been through some trying times. Times that would have killed lesser hair follicles.

But that which does not kill our hair, makes it stronger. Or at least gives us something to laugh or cry about for years to come.

And remember, it will grow back.

About fifty people told me that in my comments one time.

The life and times of my hair