You are here: Home / Doodle / Step 1…Admit you have a problem
Yesterday marked the day that I have been dreading for 3 years. I knew it was coming and I agonized, strategized, and theorized on the best steps to take to overcome an addiction problem right here in my home.

Hello, my name is Caroline and I am addicted to my pacifier. 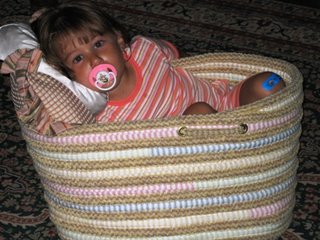 Oh, it started innocently enough. When they brought my little bundle back into the hospital room after cleaning her up, she had a huge pacifier stuck in her mouth. The pediatric nurse told me that she was the most laid back baby she had ever seen as long as she had her “paci” in her mouth.

When we brought her home 2 days later, my mother-in-law tried to convince me that I should take the paci away immediately. “It’s best that she never even gets used to it”, she said. Trying to be the obedient daughter-in-law, I took the paci out of Caroline’s mouth, wrapped her up and placed her in her bassinet. My resolve lasted all of about 5 minutes of incessant crying at which point I decided my mother-in-law needed to hush her mouth with all that crazy talk.

I can’t tell you the nights that P. or I spent with our arm hanging over the side of the bassinet holding the paci in her mouth. It was the key to sleep, oh lovely sleep. The day that Caroline learned how to put the paci back in her own mouth (and I can’t overstate this) was one of the best days of her babyhood.

Like all addictions, it started so innocently but before you knew it, we were giddy with the power the paci could wield. Every naptime and bedtime I filled her crib with no less than 6 or 7 pacis to ensure that she would be able to find one and soothe herself back to sleep. At the pediatrician’s office when they asked to make sure we had gotten rid of the paci by age 18 months, I told them yes we had and technically it wasn’t a lie because we had gotten rid of it…right before we walked into the exam room.

I knew in my heart there would come a day that it would all have to end. I began the build up to breaking the addiction early this summer. I explained that 3 year olds don’t have pacis because they are big girls, and big girls get to do so many fun things that they don’t even need pacis.

She seemed to buy it and would tell complete strangers, “I’m going to be 3 and I don’t need my pacis anymore”. The girl talked a good game.

I’ve been procrastinating for the last few days, knowing it had to happen but dreading it with every fiber of my being. In the end she decided that today was the day. We were driving home from my sister’s house and I asked her if she was ready to give up the paci. She said “yes Mama, let’s do it today. I want to throw them in garbage today.”

We got home, gathered the pacis and with great ceremony marched out to the outside trash where she dropped them one by one into the trash can. Honestly, I was relieved but a little sad to see them go. Everyday she loses a little bit more “babyness” and becomes more and more a little girl. The paci has been such a part of her babyhood and it’s a little weird to think that it’s one more thing that’s done.

As I rocked her and read to her tonight before bed, I could tell her resolve was crumbling a little. She looked at me and said “Mama, I don’t want to be a big girl”. It broke my heart just a little because I’m not sure I’m ready for her to be a big girl either. So I hugged her real tight and told her that I was proud of her and while she may be a big girl, she’ll always be her Mama’s baby.

Random things that have made me laugh this week

Of all the things I’ve done in my life, being th

I was going through old pictures and came across t

Tonight I roasted this whole chicken that Jamie fr

I cleaned out my closet over Spring Break but left

Best of the day.

First thing I saw on Twitter this morning. My Saturday is complete. Perfection.