I’ve never been one to make a lot of New Year’s resolutions. Maybe it’s because they are very similar to goals and, honestly, who needs that kind of pressure?

However, if I were the type of person to make resolutions then I’m ahead of the game because I’ve already accomplished something significant and the new year hasn’t even begun. 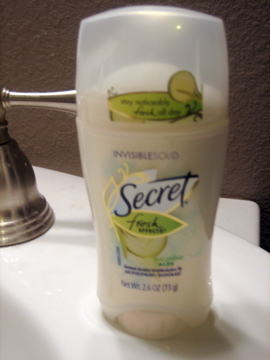 That’s right. I will ring in 2010 smelling of cucumber and aloe. I felt like I should treat my underarms to the aloe after all they have endured with the Degree Cool Sport for Men for the last month.

It seems that since this is my last post of 2009 that I should write some sort of recap of the year but I don’t really know what to say about 2009. I won’t remember it as a great year and I won’t remember it as a bad year. It’s just been a year. Don’t get me wrong, there have been a lot of fun times and I’ve had more moments than I can recall where I have laughed until I’ve cried. There has been much joy and sweetness.

But in some ways I’ve spent a lot of the past year feeling a little stagnant. I started the year feeling like I kind of knew where life was headed, but then it just seemed to stall out a little. And the truth of it is that I think I’m the one who stalled. I just got tired and lost my way a little bit.

I was reading through Judges the other day (Yes, I’m a little behind in my plan to read the Bible in a year. Don’t judge me. Get it? Don’t judge me? Because I’m in Judges? Just a little nerdy Christian humor.) and came to the story of Gideon in Judges 6. The Israelites have been invaded by the Midianites and they are totally oppressed by them. In the midst of all this, there is a man named Gideon who is threshing wheat in a winepress. Normally, according to the wheat-threshing experts, he’d thresh his wheat out in the open. But he’s afraid of the Midianites and so he is hiding.

And while he is hiding out, an angel appears to him and says “The Lord is with you, mighty warrior.” Oh, how I love an angel who deals in irony. Mighty warrior? Gideon is hiding. He’s threshing his wheat in fear and yet the angel calls him a mighty warrior.

The angel has come to tell him that God is going to use him to deliver the Israelites from Midian. At first, Gideon doesn’t believe it. In fact, he asks God for a sign two different times to make sure he’s heard Him right.

Ultimately he ends up being exactly what the angel called him, a mighty warrior. He defeats the Midianites using only three hundred men. Do you see what God did there? He called what was not as though it were. That’s what God does. In Romans 4:17 it says He is “the God who gives life to the dead and calls things that are not as though they were.”

God sees what we can’t see. He sees something where there is nothing. And, even though I’ve read the story of Gideon and had that revelation before, I read it with fresh eyes the other day. I needed the reminder that God sees something in me that I don’t see in myself. I see all my fears and insecurities and worries and just general yuck, but He looks at me and sees something entirely different. He sees something He can use for His plans and purposes.

All that to say that I want 2010 to be about hearing His voice. Because He sees something where there is nothing and I want to see what He sees.

I wish you all a 2010 full of lots of happy and joy. I’ve said it before and I’ll say it another thousand times, this blog wouldn’t be any fun without every single one of you. Thank you.

Just a lot of nothing much

Anchors and fireworks and 2009 aweigh