You are here: Home / Doodle / Dizzying heights of fun

Several of you asked how I achieved the poof on the top of my new drapes. I promise I will do a photo tutorial tomorrow, but at the moment I am suffering from a touch of the vertigo after spending the afternoon at the Rodeo Carnival.

Since the kids were out of school for President’s Day, Gulley and I decided it was the perfect day to take them to the rodeo. It was a little chilly, but the sun was shining so we headed out to the fairgrounds full of hope and optimism.

The kids all agreed that our first stop needed to be the ferris wheel. 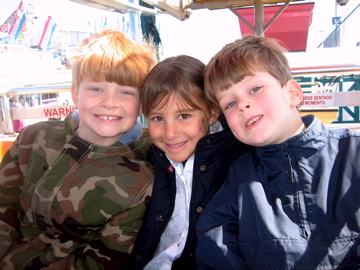 That look on Will’s face is what he refers to as his “sweetest smile”.

Gulley and I decided we’d join the kids on the ferris wheel. 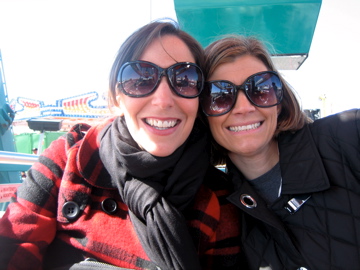 Holy Rachel Zoe. Were the stores out of the large sunglasses?

After the ferris wheel we wandered around and let the kids ride a few more rides, including a worm in desperate need of some orthodontia, the bumper cars and the Pirate Ship. 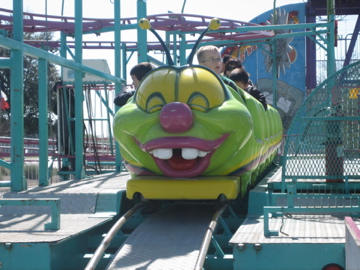 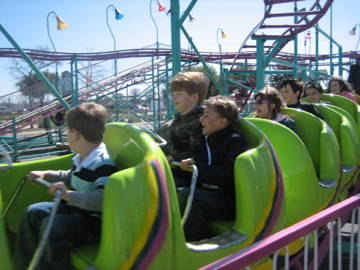 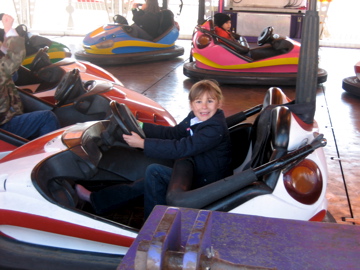 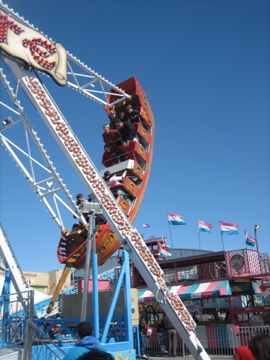 Finally, Gulley and I couldn’t stand it any longer and insisted that it was time to go where all the real carnival magic happens. 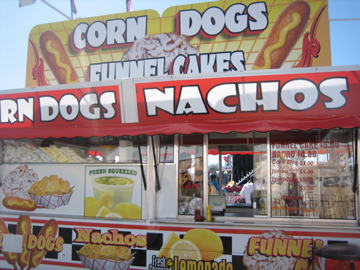 We started with corndogs with a side of Texas Twisters, which are homemade potato chips that were gone before I was able to get photographic evidence that they ever existed.

Then I was torn between the turkey leg or the gordita. Ultimately, the gordita won out because there is no gordita like a rodeo gordita. 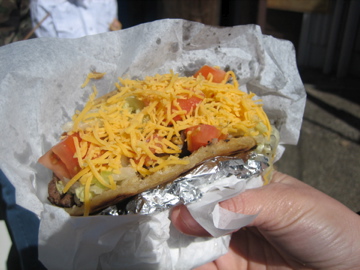 However, I am sad to report that the gordita was filled with beef fajita meat that had never met any kind of tenderizing treatment. I finally just threw the rest of it out because I felt conspicuous standing in the middle of the fairway re-enacting one of those scenes from Wild Kingdom where a lion is trying to choke down an elephant.

I found some consolation in the arms of a funnel cake. 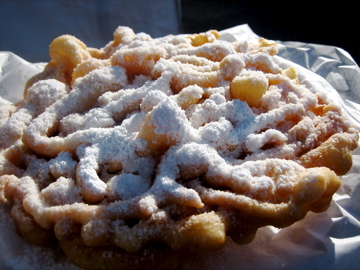 Anyone who says that food is not love has obviously never enjoyed a funnel cake at the rodeo.

The kids were impatient to get back to the rides, so we headed back in that direction and saw something that stopped us in our tracks. 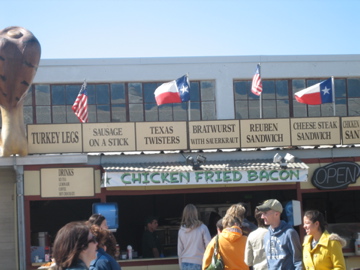 It’s served fresh from the fryer with a side of coronary bypass.

Oh, and Caroline saw what she referred to as the “Pickle Bird” and wanted to get her picture made with him. 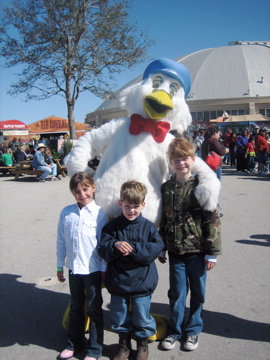 We finally made it back to the rides and Caroline and Jackson announced that they wanted to ride that ride where you ride up to the top and then it drops you and you do a free fall for about ten seconds but it feels like a thousand lifetimes. I can’t remember what it was called but I will henceforth refer to it as the Tower of Doom.

For some reason I decided that it would be fun to join them on the Tower of Doom. After all, I spent most of my childhood summers as a frequent patron of Astroworld where I regularly rode the Dexter Frebish (later renamed the Excalibur, but it will always be the Dexter Frebish to me) and the Cyclone and the Sky Screamer. I laughed in the face of danger. Give me some turkey legs and a Gravitron and get out of my way.

(Seriously, just thinking about the days of yore at Astroworld makes me want to weep because it no longer exists and what kind of childhood will Caroline have if she can’t experience the Alpine Sleigh Ride?)

So we waited in line, let the scary carnival worker belt us into our seats and lower the shoulder harnesses, and then panicked as we began to ascend hundreds of feet into the air only to plummet back to earth. I can still hear the screaming. Mainly because I was the one screaming.

As we got off the ride, Jackson announced he wanted to go again and Caroline looked a little shell-shocked. Me? I was just trying to keep down my corndog.

Because you know what doesn’t really mix as well as it did thirty years ago? Vast amounts of junk food and rides that defy the laws of physics and gravity.

I never really recovered after that. I think it might have given me a case of vertigo.

So Gulley had to take one for the team and ride this swirly, spinny thing with the kids. TWICE. 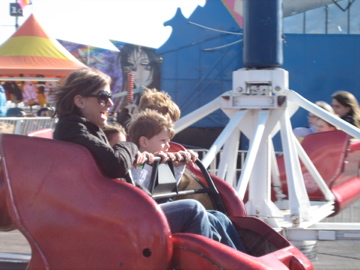 After a big day of fun, we announced it was time to head home and everyone commenced with the wailing and the whining. Gulley and I were forced to join in the chorus of mothers who were saying “What you ought to be saying is THANK YOU for the great day, Mom, instead of whining about it being time to leave, FIVE HOURS LATER.”

In fact, I’m a little embarrassed to admit that I think I pulled out the phrase, “Maybe you should examine your heart”.

But by the time we made it back to the car, they all agreed that a good time was had by all. 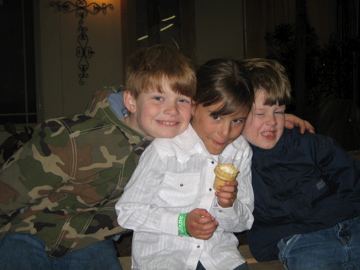 Even though it ended too soon.

And I got the vertigo.

I can’t apologize enough for this video