You are here: Home / Just for fun / The longest before and after post ever

P and I began dating in March of 1995. That means that we’d almost been dating for one year when our first Valentine’s Day as a couple rolled around. I was hoping for a ring. Instead, I received a large tin full of cinnamon-flavored popcorn. It’s not that the popcorn wasn’t delightfully delicious as much as the fact that there wasn’t a diamond solitaire anywhere in that tin. And, trust me, I looked long and hard and very subtly as I ate an entire tin of popcorn in three and a half minutes under the guise of being hungry.

The problem was, even after a year of dating, I didn’t know P well enough to know that he wasn’t a fan of any holiday that he deems to be a passel of lies being sold to the American public. I should’ve realized it when he chose to spend our first New Year’s Eve hunting at the ranch with his friends instead of taking me out to a romantic New Year’s Eve dinner which led us to spend the first day of 1996 breaking up as we argued over what constitutes a holiday (according to him a holiday isn’t a day that falls during the height of deer season) but love is blind and optimistic.

Now, fourteen years, a wedding ceremony, one mortgage, a child and two dogs later, I totally agree with him on the whole made-up holiday thing. Oh sure, you may say that he’s trained me to disregard Valentine’s Day and New Year’s Eve, but it’s really no different than how I trained him to do his own laundry after one week of marriage. Frankly, I think I got the better end of that deal.

And just to be clear, we haven’t robbed Caroline of the Valentine’s Day experience. In fact, she got a Hello Kitty DVD and a new pair of binoculars this year because that’s what she wanted and how is a girl supposed to get by without her own pair of optics when she’s afield?

The thing about P is that he does really nice things for me all year long. He gets up first in the morning and turns off the ceiling fan so I don’t freeze, he brings me flowers for no reason, he doesn’t ever care when I announce that I’m too tired to cook and I’m calling in some Mexican food to go, and he never questions the fact that every purchase I bring into the house was bought for the bargain price of $15.00. And last week he completely outdid himself and installed a new kitchen faucet (even though he killed my farmhouse sink dream) and hung my new curtain rods.

One of the things Holly suggested was that I add some drapes in the living room. What Holly didn’t know was that I am deathly afraid of window treatments. They intimidate me. I blame it on some ill-conceived JC Penney drapes that P and I had in our first apartment. They were so unfortunate with their green swag of fabric draped across the top.

But Holly insisted that drapes were the way to go and I was too embarrassed to tell her about my long-standing drape phobia. We began to look for fabric and ultimately found this beautiful Robert Allen fabric that was on sale at Fabrics.com for $6.95 a yard. It was exactly what I wanted, something soft and subtle that would add some texture to the room and coordinate with the fabric we’d chosen for some new pillows.

However, I let my fear keep me from committing to the fabric purchase until Holly told me that I needed to go ahead and buy it because it was great fabric at an unbelievable price. She even calculated that I’d need about fourteen yards and I’m forever grateful to her for doing that bit of math for me because I don’t know what my guess would’ve been other than JUST WRONG. So I went online to order the fabric and it had been reduced to $1.95 a yard. ONE DOLLAR AND NINETY-FIVE CENTS A YARD. You can’t buy burlap for $1.95 a yard.

Or maybe you can. I really have no idea.

Procrastination has never served me so well. I ordered all the fabric I needed for less than $30.00. But then Holly began to mention words to me like “drapery lining” and “sewing machine” and I felt frightened all over again. I actually own a sewing machine but only because my mother-in-law was getting rid of it and asked me if I wanted it and why would I turn that down? That would be akin to admitting that I’ll never learn to sew and I’m totally going to learn how to sew. SOMEDAY.

Holly realized that all the sewing might never happen and the drapery lining was wishful thinking at best, so she suggested that I might want to just “mistreat” the windows with the fabric a la The Nester. (If you don’t read The Nester, you are missing out on a veritable wealth of home decorating information) I knew that Sophie had mistreated her windows with much success and since I know she and I function at about the same level of non-crafty, I felt that there was hope for me and the mistreating of the windows.

So I bought new curtain rods and clip rings at Lowe’s. Then God smiled on me and it rained all day Thursday causing P to say out loud in my presence, “I’m bored”. Which led to this pleasant development. 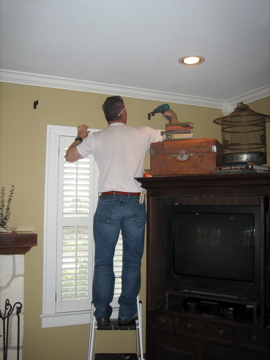 I don’t know that he’ll ever utter the words “I’m bored” again.

I rolled all fourteen yards of fabric out as best I could given the fact that I don’t have a room that’s fourteen yards long and then I nearly caused my brain to explode as I tried to compute the measurements of how much fabric I needed to cut for each window. A timely call from Sophie saved me from what would have been a terrible tragedy because I was about to cut the fabric right down the middle because I was in way over my head. 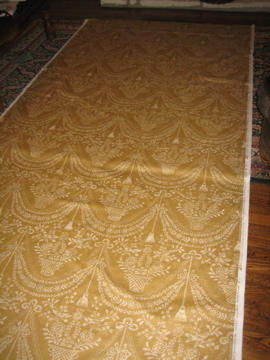 Words can’t describe the level of stress I felt as I debated cutting into the fabric because Holly had stressed that it was very important that I line the pattern up and each panel needed to match. My head hurts right now just thinking about. But finally I looked at P who was sitting on the couch trying to figure out how on earth I’d decided I could make my own drapes and said, “Well, here goes nothing. At least the fabric only cost $28.00 if I totally screw this up.”

He replied, “Yeah, but if you screw it up you’ll never find that fabric at that price again.”

It wasn’t really the word of encouragement I was looking for. Also, please note that I told him the actual price of the fabric because it was such a good deal and I needed him to know how much money I’d saved him. It totally makes up for all the other $15.00 items we have around the house.

I took a deep breath, hyperventilated for several minutes and began to cut. And now I have drapes in my living room. 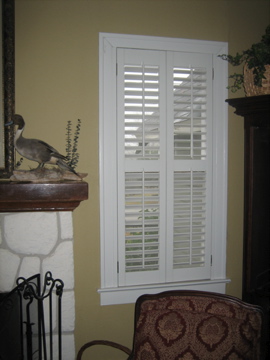 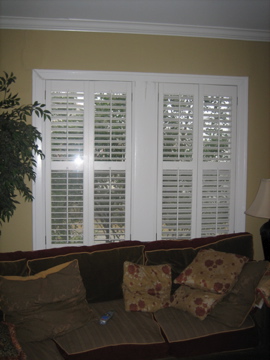 Let us never speak of that fake plant again. It was the devil’s foliage.

And here’s the after. 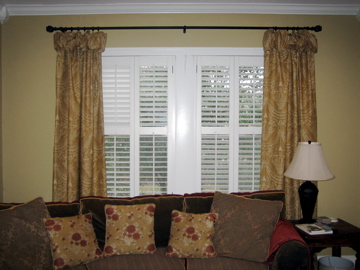 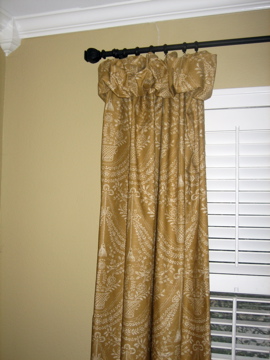 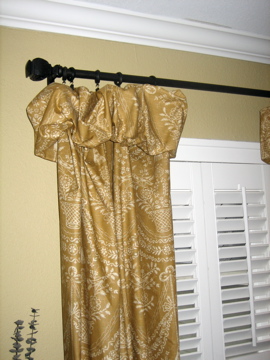 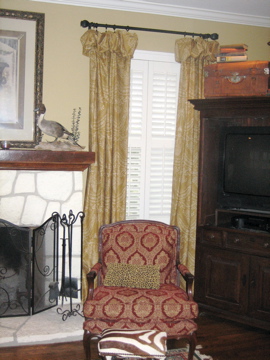 Please don’t mention that vast array of animal prints. I was a woman on the edge who just made my own curtains and I threw that pillow and the footstool over there. I’m not attempting any sort of safari theme.

New pillows and other accessories will be coming soon. And, no, I’m not making them myself.

Fashion Friday: Edition how hard is it to put on some real pants