Five years ago, Gulley had a three-year-old little boy and a four-month-old baby and was about to celebrate her thirty-third birthday. Although I use the term “celebrate” loosely because I don’t know how much celebrating anyone does when you have a toddler and a newborn in the house. Crying? Yes. Celebrating? Not unless the grandparents show up and offer to stay for the weekend.

I decided that what she really needed for her birthday was a girls’ night out and so set about making plans to get a group of her girlfriends together to go out for Mexican food. Honestly, I didn’t even know most of the other girls at all except in passing because they were friends she’d met through someone other than me. (That’s kind of the way our friendship has worked for the last twenty years; Gulley is the more outgoing one and so she’s in charge of making all the new friends and then I just take them on as my friends. It’s a process that has worked beautifully.)

But we all had such a great time at dinner that someone suggested we should go out once a month. And so we have for the last five years. We call ourselves Birthday Club because our original intent was to celebrate each member’s birthday. Our husbands like to point out that there are only six of us and yet we have a birthday to celebrate twelve months out of the year. To which we respond “YOU’LL BE QUIET AND QUIT QUESTIONING THE MATH IF YOU KNOW WHAT’S GOOD FOR YOU” as we walk out the door to go eat chips and queso.

What I love the most is that we never really schedule our dinners. We just know at some point in the month someone will email everyone else and say, “I’M ABOUT TO LOSE MY MIND IF I DON’T GET OUT OF THIS HOUSE FOR AN EVENING” and we’ll all check our calendars until we find the closest night that works for everyone.

(Apparently Birthday Club uses ALL CAPS in my mind. If you could hear how loud we are when we get together you’d understand.)

At our dinner in May we realized we were about to celebrate our five year anniversary and all agreed we wanted to do something fun to commemorate all that we’ve been through together. Over the last five years we’ve gone from six kids between us to having six more, we’ve survived house remodels, miscarriages, and deaths of loved ones. We’ve discussed everything from our thoughts on Matt Lauer to the Real Housewives to the trials of potty-training to struggles with postpartum depression.

Basically, we’ve covered it all.

So this past Friday we checked into two rooms at the Westin La Cantera Resort to celebrate five years of friendship. And, let me tell you, by the time I arrived I was in desperate need of some girl time. Caroline has mastered the art of guilt and told me before I left that she wanted to watch me walk away because it was “the last time I’ll see you walking before tomorrow” and “it seems like you would want to come home to your child”. It was slightly dramatic considering that I’d be gone less than 18 hours and she was spending the night with Mimi and Bops which is the equivalent of being at a theme park with a full-service wait staff who serve rootbeer floats at regular intervals.

Anyway, we arrived at the hotel and it took us approximately 4.3 seconds to change into our bathing suits and head down to the adults-only pool armed with sunscreen, big floppy hats and a few copies of People and InStyle magazine. As it turned out, we didn’t need the magazines because we never quit talking while we sat piled together on six lounge chairs looking out at the incredible view of the Texas Hill Country. 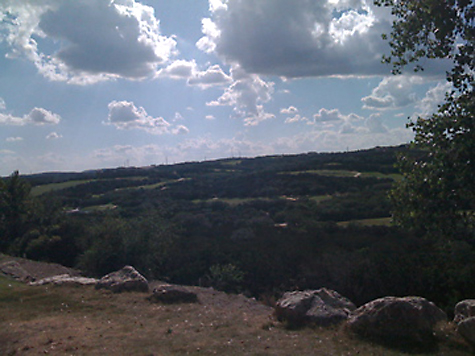 Later on we ate dinner and then headed back to our rooms where we had an in-depth discussion about all the ways we do not understand what the kids are listening to on the radio these days. Who is Ke$ha with a dollar sign? Where did Justin Beiber come from and why can’t we get his song out of our head? What does it say about us that we can look through a People magazine and not know who half the people are or why they are famous for this particular fifteen minutes?

Then our friend Julie revealed that she doesn’t own a DVR which caused us all to have a few moments of silence as we pondered what our own lives would look like without it. To make matters worse, she asked, “Is that the thing that lets you rewind shows while you’re watching them?”

Listen, we are all praying for her.

After staying up laughing and talking way too late, Steph woke us up the next morning after she returned from her morning workout (we’re praying for her, too) and we all went down to eat breakfast. Which is where this unfortunate picture was taken. 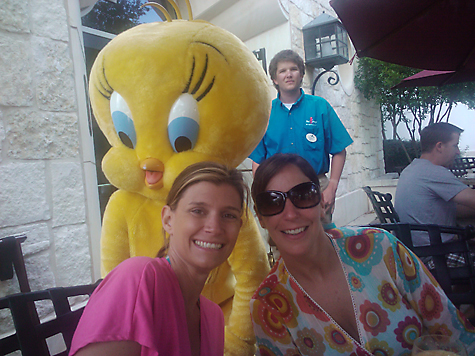 I don’t know why Tweety Bird chose to come over to our table since, clearly, we were child-free and there were plenty of other surrounding tables with children just dying to get in on some Tweety Bird photo action. Yet Tweety kept loitering by our table and waving awkwardly until our friend Amy finally pulled out her camera and took a picture of Gulley and me with Tweety just to appease him. And after all that, poor Tweety misjudged the direction of his eyes and posed looking in the wrong direction. Also, is it just me or does that waiter in the background look like he’s in the midst of some deep thoughts? Maybe he was wondering why a table full of grown women wanted a picture with Tweety Bird.

Sadly, I only got about another hour by the pool before it was time to go home to my child and chauffeur her to 164 different birthday parties on Saturday afternoon. But it was so much fun while it lasted.

Now we’re just trying to figure out how we can upgrade our monthly dinners to a monthly sleepover at a nice hotel. Something tells me that’s going to be a hard sell, but we may be able to provide a convincing argument if we put together a budget chart showing how much money we’ve saved each other in professional therapy bills.

When you look at it that way, the hotel room essentially pays for itself.

I feel like I should apologize for the photo quality

The lazy days of summer

Happy Birthday to the one who still makes me laugh

While I didn’t enjoy the outcome of the game, I