You are here: Home / Capital P / Jumping the Christmas shark

I thought I’d go into excruciating detail about how we spent the rest of our Thanksgiving weekend, but I can hardly remember. I think it was Saturday before I regained consciousness from my whipped cream hangover and all I really know is that we watched a tremendous amount of college football. Between all the close games and the amount of butter contained in most holiday casseroles, I can only imagine that it proved to be a banner weekend for cardiologists all across the United States.

About noon on Friday, P decided that he was going to head down to the ranch to spend the night. I asked him if he had any interest in getting the Christmas decorations down from the attic for me before he left. And so he did. Even though it’s his personal belief that the last weekend of November is too early to decorate for Christmas. In fact, he told me that I jump the shark on Christmas decorating every year. I think what he was trying to say is that I jump the gun on decorating. Jumping the shark would imply that I might pay the neighborhood children to perform a living nativity in our front yard every night from now until Christmas.

Which now that I think about it, PURE AWESOME.

So maybe I’m inclined to jump the gun AND the shark.

After P left, Caroline and I began to go through all the decorations. Everything appeared to be accounted for except for my MERRY AND BRIGHT sign. And I’m trying not to take that as a sign of things to come. I plan to enjoy the Christmas season with my MERRY AND BRIGHT firmly intact.

I managed to get most of the inside decorated and even made a quick run to Michaels in the midst of Black Friday madness to look for turquoise ribbon. It totally paid off because I found the perfect ribbon for 70% off. I also bought a wreath hanger that’s too small for our front door and some pink glitter ribbon that called to me from the aisles.

(I don’t know why I think you care about any of this. The ribbon! It’s fascinating!)

(Their frames were also 60% off and I nearly bought two black ones and then I didn’t because it’s Christmas and I felt guilty buying things for myself and now I regret that I didn’t just buy them. Why do I overthink everything?)

Caroline and I took a brief break from all the football and Christmas decorating to go see Tangled in 3-D Saturday afternoon. We both absolutely loved it. And then we ate Mexican food with Mimi and Bops because leftover turkey was dead to me and I hadn’t had Mexican in over six days. Well, unless you count that A.J. and I met at Cafe Salsita for breakfast earlier that morning. But that’s breakfast and it’s different from dinner. And now I’m just stating the obvious.

Sunday morning we went to church and then I attempted to take a Christmas card picture of Caroline. The verdict is still out on that whole process, but I’ll keep you posted. Then the time came to go get our Christmas tree.

Mimi and Bops always do the tree thing with us. We all meet at the lot, load both trees up in P’s truck and then take their tree back to their house before we head home and attempt to get our tree to stand up straight. This process is met with varying success each year. It’s the whole getting the tree to stand up straight that has been the cause of marital stress in years past. Apparently one of us has a hard time knowing what a straight tree looks like.

I’ll go ahead and admit that I am that person.

Me: “Well, now I think it may need to go a little bit more to the left. Or maybe it’s the right.”

And this scenario tends to cause a bit of frustration.

But this year we got smart and realized the advantages of child labor. 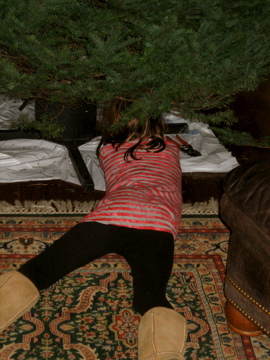 Oh sure. She tried to complain that she was too tired to help after we made her carry the tree in on her back, but what’s the point of having kids if not to get the benefits of free labor?

Just wait until we make her hang the outdoor lights later this week while we threaten that Santa won’t come if the house isn’t properly illuminated.

Speaking of proper illumination, after we secured the tree in an upright position, I began to wrap the whole thing in lights before we hung any ornaments. Last year I read somewhere, probably Sadomasochist Monthly, that it’s better to string the lights vertically on the tree instead of wrapping them around the tree. True to form, I have no recollection of why this is supposed to be better but yet I did it anyway because some person in some article I can’t remember said it was the best way to do it.

And I have to disagree with that unknown person in the unknown article because now I appear to be short by at least two strands of lights. Caroline and P tried to convince me that it doesn’t matter because it’s just the back part of the tree and no one will notice.

But how am I going to jump the shark this Christmas if I don’t have a tree with a maximum display of wattage?

A Thanksgiving day in the life