You are here: Home / Compassion / This isn’t the short version

I don’t even know how to put this weekend into words. But let’s all believe that I will now attempt to do that very thing as I ramble until I end up with approximately 1,000+ of them. I’d been looking forward to this past weekend for as long as I can remember and I came home feeling humbled, amazed, grateful, inspired, and exhausted.

That’s a lot to pack into one weekend. In fact, as I attempted to recount everything to P on Sunday night, I suddenly burst into tears for reasons I didn’t even understand. He just looked at me and said, “Wow. You are all hyped up on some estrogen after being around all those women.”

I don’t know if he’s ever been happier to be trapped on a couch with me as I share my feelings as he was at that moment.

So, let’s start from the beginning.

On Thursday morning, my dad dropped me off at the airport for my flight to Birmingham. It was then that I realized I’d made a serious rookie mistake and forgotten to check in for my Southwest flight online. This resulted in a B 22 boarding pass which isn’t as bad as it could’ve been, but certainly isn’t ideal. But I breezed through security without any kind of inappropriate groping and that felt like a win. I stopped at Starbucks for the Grande Peppermint Mocha I’d been anticipating all morning, only to be told that they were out of peppermint. How does this happen? It’s Christmas time.

I boarded my flight and spent the next few hours reading all about Prince William and Kate Middleton, although she apparently wants to go by Catherine now. It looks like the wedding is going to be April 29 at Westminster Abbey and there is much debate about which tiara she’ll wear. I just thought you might want to know.

Also, I promise I’ll quit with all these meaningless details as I flounder for a storyline.

Once I arrived in Birmingham I checked into my hotel room and then headed to the arena to start my official event team duties even though I had no idea what those were and what I was doing. We spent the next few hours looking for walkie-talkies and pulling out reserved signs for various seats and getting things organized for the next day.

Later on I headed back to the hotel and Sophie came to pick me up for dinner. I’d thought we’d eat Mexican food, but we ended up going to eat at some fabulous restaurant downtown. It’s safe to say I’d tell you the name of it if I could remember. I just know I ate some pasta that changed my life and a tiramisu I’ll remember when I’m on my deathbed.

Friday was filled with putting signs on seats and filling gift bags and making sure the merch (love the merch!) was all ready to go. I’m sure there were other things involved but I was too busy walking around asking, “What am I supposed to be doing? Do I need to be somewhere?”

Bless their hearts, they decided to give me a walkie-talkie anyway. Probably because they knew I was going to be in dire need of guidance and direction.

My official role was Greeter Assist. Which means I was in charge of the volunteers at one of the arena entrances and had to fake an air of confidence and authority. Fortunately this is part of my skill set. It’s how I rolled for ten years as a pharmaceutical rep. “ABSOLUTELY NOT! THIS DRUG DOESN’T INTERFERE WITH THE CYP450 METABOLISM!”

Anyway, the doors opened at 5:30 and that’s about the last time I had a coherent thought that day. CRAZY TOWN.

On Saturday morning, Betsy (our LifeWay event team leader) told us to be packed and downstairs at 6:25. In the morning. The good news is I’d managed to get about four minutes of sleep the night before so I was ready to go with my bloodshot eyes and feet that felt like I’d walked on a bed of nails.

I went back to my post as Greeter Assist until the crowd died down and I found Kelly and Heather holding my contraband Starbucks. That Grande dose of caffeine may have been what saved me. It certainly was the only thing that gave me strength to work the merch tables selling $2.00 t-shirts.

But, seriously, I’ve attended a lot of LifeWay events over the last three years. However, I’ve never done the event team thing and I had NO IDEA what all goes into the entire thing. They work so hard to make the whole thing come together and the thing that impressed me the most was that everyone just does what needs to be done. (In editing this, the other thing that should impress me is the number of times I used the word “thing” in the last two sentences.) No one says that something isn’t their job or they’re too busy. They just go. And they have fun while they do it. I’d never met the majority of women on the team, but I loved every one of them by the end of the weekend.

Okay, so the other component of the weekend was a Compassion Bloggers’ Reunion. Amanda worked with Shaun Groves to organize a reunion of all the bloggers that have been on various Compassion trips. They all attended Deeper Still, but I didn’t really get to see any of them during the event because none of them were in line buying $2.00 t-shirts.

But Compassion hosted a dinner on Saturday night for all of us. So after the event ended, I changed out of my green Deeper Still t-shirt and into something a little more dinner-ish. (I don’t know what that means.) And then Kelly, Amanda, Heather and I piled into Sophie’s car in search of some caffeine and a place to kill a little time since the dinner didn’t start for another hour.

Which is how we ended up parked on a street in downtown Birmingham drinking various soft drinks from McDonalds. Sophie knows how to show some girls a good time. And she pretty much summed it up when she said, “Who would have ever thought I’d be parked in front of the McWane Center with a car full of people I met on the internet?”

We laughed and talked and told stories about our kids and other various things until we were crying and laughing. Then it was time to head to dinner at Cafe DuPont.

I could tell you about the restaurant and how much I loved it and how the dessert changed all my preconceived notions about the wisdom in combining cheesecake with acorn squash. (IT TURNS OUT THAT IT’S SO RIGHT AND GOOD.)

But none of that is the most important thing. The thing that mattered to me were the people in that room. The people whose words I’ve read and cried over and have been such an inspiration to me. (I honestly think I might have frightened Ann Voskamp a little. She is so graceful and beautiful and I went a little FAN GIRL on her.)

Steve Jones, who works for Compassion and went to the Dominican Republic with my group, stood up at dinner and told us that 5,000 kids have been sponsored through the Compassion blog trips. 5,000 little lives. I have no idea what part of that number is mine. It may be just one for all I know. (This is where I want to tell that story of the starfish on the beach but I will stop myself because seriously.)

It made me cry to hear that number. To be among people who took time out of their daily lives to write words that have ultimately led to impacting 5,000 lives. It’s humbling and it makes me want to do more and to live a life with purpose.

(Not that talking about the Real Housewives on the internet isn’t purposeful. Because, OF COURSE.)

Anyway, I have no way to wrap all this up in any kind of adequate way. It was just a great weekend filled with fun and friends and laughter and tears and so much more that will probably have to be another post at some point when I have the words.

So, for now, I’ll just leave you with this picture from the Compassion dinner. You’d think that after the weekend I had that I’d have a whole slew of pictures. But that would have involved taking my camera out of my purse. 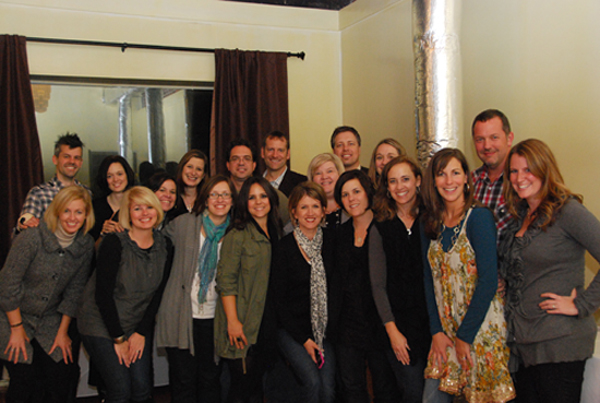 If you’re interested in some cute Christmas cards and saving 25% off your order, click on over to my review page and read all about the Little Card Company.

Also, the NFL Take it to the House program is almost over. Click here to read all about it.

Not to be confused with her cousin, Leather