You are here: Home / Another day / Sometimes I feel like no one is listening

So that’s what I had to say about that.

And I cannot thank y’all enough for your kind words and encouragement. Seriously.

Honestly, now I feel a little bit like George Costanza. Like I may just need to say “I’M OUT!” and shut down the blog forever.

But I think we all know that I have way too many words stored inside my head to really do that. Plus, what would become of poor P if I didn’t get out at least 1,000 of my words here every day? He’d be forced to listen to my thoughts on The Bachelor and why I never pay full price at Gap and how I saw this product called Easy Feet on sale at HEB yesterday and am so confused how people who can’t manage to wash their own feet could get their feet so dirty that they’d need special shoes in their shower.

It would really only be a matter of days before he’d move out to the back house and just visit us at mealtimes.

(I know this because he’s sitting right next to me and I went into great detail explaining why I don’t believe we should even have Daylight Savings Time because they’ve monkeyed around with the dates to the point that it’s not worth losing an hour of my life every spring. And he looked at me and said “Hmm.” Clearly he is very passionate about the whole thing.)

(Also, to add insult to injury, I just tried to save this lame post while I went and grabbed the camera so I could download pictures from Caroline’s soccer game this past weekend. But my blog broke and the whole bottom half of what used to be this post disappeared. I was grieving my loss when P asked what I’d written about and I said, “The fact that you had no interest in my thoughts on Daylight Savings Time”. To which he replied, “When were you talking about Daylight Savings Time?” I KID YOU NOT.)

Anyway, I guess I’ll assume that no one wants to hear my thoughts on Daylight Savings Time so I’ll tell you about our weekend instead. It was unremarkable.

Unless you count the fact that we all almost froze to death at Caroline’s soccer game on Saturday morning. I realize that many of y’all are hardy Northern stock that laugh in the face of temps in the mid-50’s and north winds gusting up to 30 miles an hour, but we’ve been in flip-flops and shorts for over a month now and it came as a complete shock.

Note to self: Watch the weather forecast the night before a soccer game. Don’t assume it will be warm just because it’s been warm for the last thirty-two days. Also, don’t judge the temperature and windchill factor by standing on your covered back porch on the south side of your house.

The good news is that the frigid temps and gusting winds allowed P the chance to give our team of seven-year-old girls a lecture on mental toughness. A lecture they really seemed to take to heart while they huddled together under an assortment of quilts and blankets. 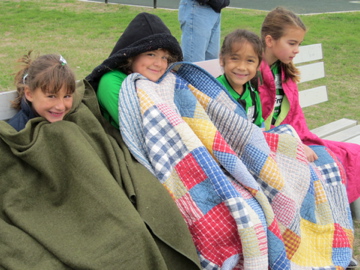 I’m just so glad that some of the other mothers had the good sense to bring some blankets because you know what I brought? A beach towel. 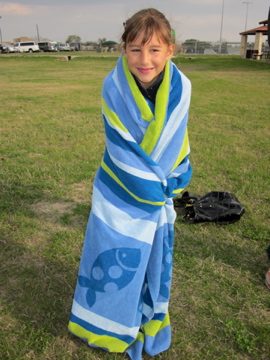 And if I’m being completely honest, I didn’t even bring the beach towel for Caroline. I brought it for myself because I thought the field might not have bleachers. Mother of the year.

After the soccer game, P and Caroline headed down to the ranch to burn a bunch of brush because a good burn makes the land healthy. I know that because I listen to P when he talks.

(Y’all aren’t going to believe that I just asked him if he took any pictures of the fires while they were there and he asked, “Did I have the camera?” Yes. That’s what I meant when I put it in your ranch bag and said, “I’m packing the camera in your bag. Take some pictures.”)

So, no pictures of the fires to show but let’s believe they were impressive because Caroline came home and announced her new favorite ranch activity is “BURNING THINGS”. Bless her little pyromaniac heart.

Meanwhile, I spent a large chunk of my free Saturday afternoon watching a remake of Ice Castles. I would like to mock it endlessly and talk about how you know you’re watching quality programming when the commercials are infomercials for a knock-off of Kate Middleton’s sapphire engagement ring for only $19.95, but since I cried at the end of it I feel that I’ve lost my right to act like I’m too good for a remake of one of the schmalziest movies of all time.

Saturday night we ate dinner with some friends and Caroline’s friend, Sadie, came home to spend the night with us and ended up spending most of the day on Sunday with us. I took the girls up to the ballpark to watch Gulley’s oldest, Jackson, play in his first baseball game of the season. He got a base hit on his first at-bat and Gulley got teary and then I got teary watching Gulley get teary. I realize it’s not as emotional as skating in the nationals after a career-ending injury while Robbie Benson looks on and “Through The Eyes of Love” plays in the background, but still, it was a big moment for him. We were so proud.

Then after that Caroline decided to go to choir practice with Sadie. I thought this might give her a chance to see if she enjoys singing, but she came home and announced that choir is boring because all they do is sing.

So that’s probably the end of that.

And this should probably be the end of this post. If you didn’t make it to the end or can’t remember anything I said, don’t feel bad. I seem to have that effect on people. Especially people I’ve been married to for 13 1/2 years.