You are here: Home / Another day / Someone did not need a hug

So it’s been a while since I’ve written because I basically fell into a post book launch stupor and am just now beginning to emerge and function in the world like a real person. Plus, we had some excitement around here that felt like it needed to be shared in more detail than just an Instagram post.

I mentioned that in mid-October, P left for Colorado on a ten day hunting trip to Colorado with a friend. Several of you asked if he got anything and the answer is yes. He came home with both a mule deer and an elk. Guess who’s getting a new set of antlers in her living room and has enough meat in the freezer to last through at least three Little House on the Prairie style winters? This girl.

When he left for the trip, I basically prayed that nothing would happen while he was gone. I mean, yes, I wanted him to have safe travel and a good hunt and all of that, but I also wanted life around here to be boring and uneventful. I didn’t want to hear any weird sounds in the night or have the house alarm go off or have my car break down or a pipe burst in the wall. Essentially, I didn’t want to have to be a big girl and handle any sort of thing that falls under his jurisdiction while he was out of town.

And all was going well until one night when I noticed that both Piper and Mabel were obsessed with our fireplace. They are trained hunting dogs and have noses that are made to track animals and so I found this new fascination with the fireplace slightly concerning because vermin in the vicinity of our home is solely under P’s category of expertise. My tendency is to deal with vermin the way normal people do, which is to say I put a for sale sign in the front yard and move.

For days, Piper and Mabel immediately went to the fireplace every time they came in the house and then proceeded to growl at each other which is a for sure sign that there is something there that each of them is very interested in and doesn’t want to share with her sister. 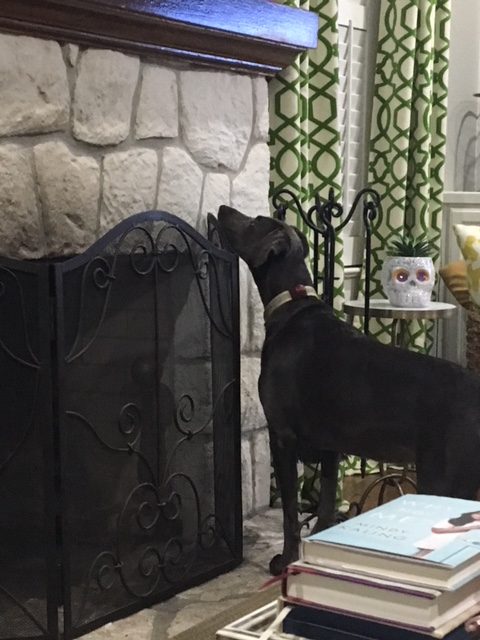 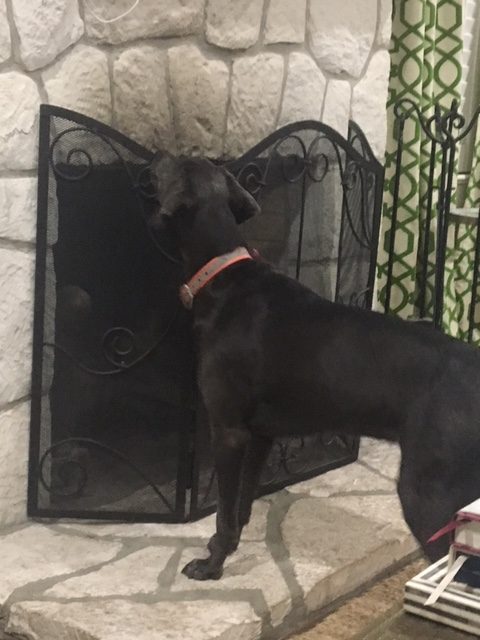 But then, probably due to my many prayers to this end, they seemed to lose interest in the fireplace and I decided maybe they’d both just been intrigued by the scent of my new lavender/eucalyptus candle because hunting dogs are known to go wild for a good candle, am I right? So I kind of forgot about it and P got home from his trip with his mule deer and his elk and life seemed to be back to normal but with 1,000 pounds of meat in our freezer and some new antlers to display.

However, a few days later, Piper and Mabel both became intensely focused on the fireplace again and so I casually mentioned to P, “That’s so weird. They did that while you were gone, too. I wonder what’s going on?”

And he asked, “Did you open the damper to see if there was anything up there?”

Yes. Sure I did. Right after I lit myself on fire.

We have been married for twenty years. I barely have the courage to open the damper to make a fire in the fireplace on a cold night when he’s out of town, so in what world am I going to open it to investigate something clearly dark and sinister lurking about? I may not have seen the movie It, Jenny, but I know what clowns are.

He grabbed his flashlight and immediately decided to check it out. He was joined by his trusty dog, Piper, because Mabel happened to be outside eating her dinner and was unaware of the potential excitement at hand. 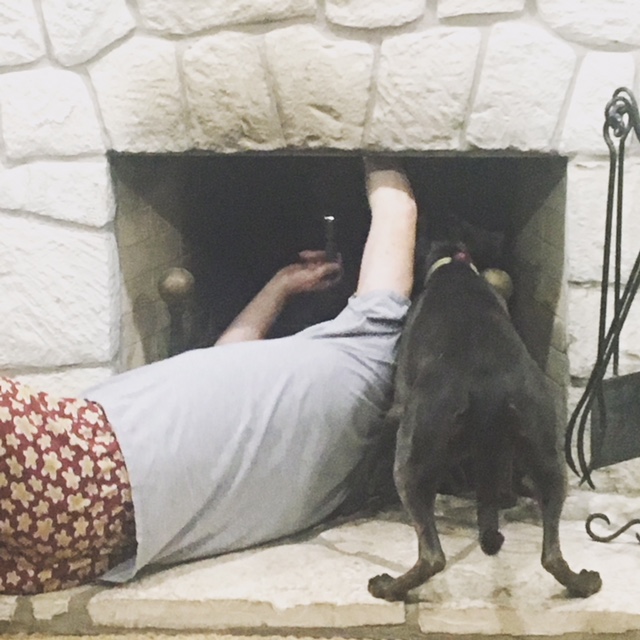 It was precisely when I took this picture that he quietly and calmly said, “OH SH*%!” as he found himself staring eye to eye with a large raccoon who had made itself at home in our chimney. I like to believe it looked something like this.

Because I am always calm and cool in a crisis, I yelled,”WHAT IS YOUR PLAN? BECAUSE I AM LITERALLY GOING TO LOSE MY MIND IF A RACCOON ENDS UP IN MY LIVING ROOM!”

But this is why it is fortunate that these types of situations fall under his particular set of skills because in the time it took me to freak the freak out, he had quickly closed the damper and cut off the raccoon’s potential entry into our domicile. After that near life-altering crisis was averted, I asked him what he would have done if the raccoon had actually jumped out of the fireplace and he replied, “I figured the dogs could have taken him.”

Isn’t that a cheery thought? Who doesn’t want to think about how two dogs attacking a raccoon could alter the state of your living area? How does one feng shui themselves back to normalcy after that?

The answer is you’d have to burn the place to the ground.

The next morning P climbed up on the roof and looked down the chimney to make sure that the raccoon had vacated the premises before securing the top of the chimney with a metal grate to make sure the raccoon would have to find a new place to crash. But Piper still remembers what was almost the most exciting night of her life and is convinced that she’ll be able to meet up with that raccoon again if she just tries hard enough. 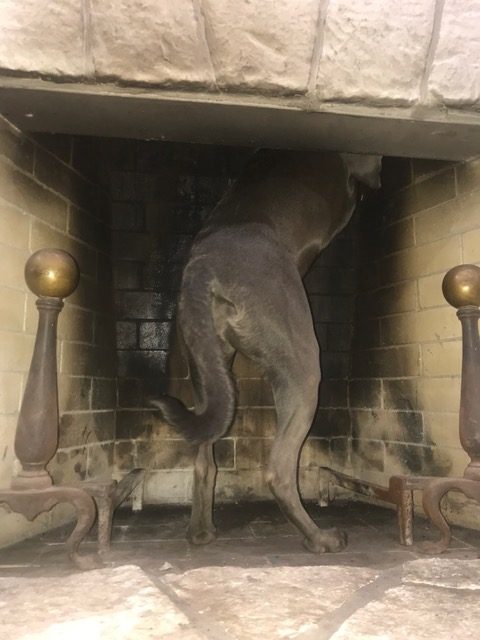 Meanwhile, I have my suspicions that the raccoon is up on our roof like this, celebrating how he came face to face with a man wearing gingerbread pajama bottoms and lived to tell about it.

And Mabel watches Piper continue to obsess over the raccoon with a little bit of pity and disdain. 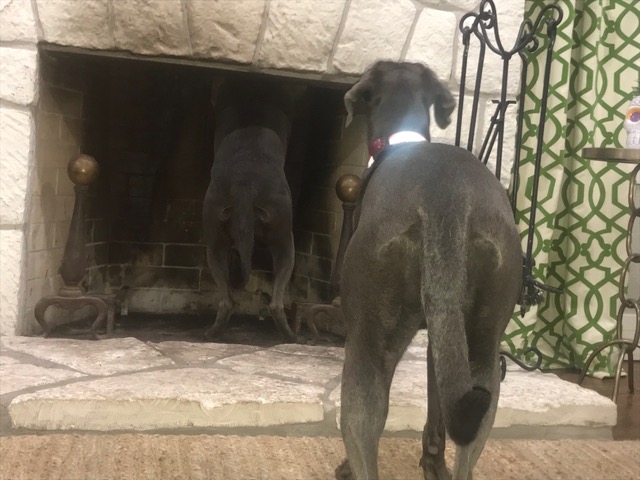 She naturally wrote a haiku about it:

And Piper wrote a poem, too.

PLS COME BCK. I WOOD LIKE TO FITE U.

Fashion Friday: Edition and so we find ourselves in November

Fashion Friday: Edition the one before Thanksgiving

Woke up to 50 like Sally O’Malley today. ⁣ ⁣

This entire thread has both delighted me and served as a cautionary tale.

Also, our second half defense.