You are here: Home / Another day / The parade of crazy

Before I say anything else today, I believe my feelings about y’all are best summed up in the words of the immortal Coca-Cola commercial:

Y’all are the best. Group hug.

About two years ago, Gulley decided it was time to enroll Will into a preschool program. She knew that I adored Caroline’s preschool, but was a little apprehensive about signing him up to attend that same school. Her reason can be summed up in three words: SHOEBOX FIESTA FLOAT.

(Is shoebox one word? If not, her reason can be summed up in four words: SHOE BOX FIESTA FLOAT)

She had been witness to her best friend turning into some sort of lunatic who called various McDonalds restaurants and begged them to hold Happy Meal toys. She saw my dark side. It was kind of like when Obi Wan Kenobi had proof that Anakin had darkness under the surface.

Actually, I don’t know if it was like that at all because I have very limited knowledge of anything related to Star Wars. I just wanted to throw that out there. Plus, I am trying to expand my Star Wars horizons because the other day I was volunteering in Caroline’s classroom and a little boy asked me some question like “Do you know what the Prince Commander of Blah-Blah-Blah and Rebel Force Blah-Blah-Blah when Blah-Blah-Blah?” I honestly had absolutely no clue what kind of answer he was looking for so I just answered “TWO?”

Have you ever had a five-year-old look at you like they pity you? Yeah, me too.

Anyway, because I have some pride issues involving my ability to make shoebox fiesta floats, I promised Gulley that when the day came that Will had to take part in the shoebox float parade, I would help her make the float.

That day arrived two weeks ago.

Gulley received the note from school informing her that it was time for the kids to make their floats. She called me up so we could schedule a day to hit Michael’s for the necessary supplies and then go back to my house to assemble the whole thing. I’d be lying if I said I wasn’t a little excited to have the chance to use my hot glue gun.

Wow. I’m so embarrassed that I just admitted that.

The goods news is that Gulley had the float theme all thought out. Her sister’s in-laws had brought her boys the entire Happy Meal collection of “Madagascar” animals over Thanksgiving (with the exception of Gloria because they must be anti-hippo) and she’d been saving them for such a time as this. I have never been more proud to call her my friend.

Last Tuesday we met for Starbucks and then headed to Michael’s. We purchased ribbon, glitter paper, and other various float materials. It never occurred to either one of us that maybe we should purchase some sort of life.

We went back to my house and began to work on the float, stopping only for lunch and the occasional Diet Coke. At one point it did occur to us that maybe it was a little bizarre that we were spending our entire day working on a float for a four-year-old who would have been just as happy, if not happier, if we handed him a shoebox with a Whoopie Cushion glued to the top, but then the hot glue gun began to burn my fingers and I forgot what I was talking about.

Anyway, by the time Gulley left to pick up Will from school, my living room floor was covered in glitter and we had most of the float finished. I instructed Gulley to go home and let Will glue on the rest of the tissue paper flowers because, after all, it’s his float. It’s not like we were going to do the WHOLE thing for him. 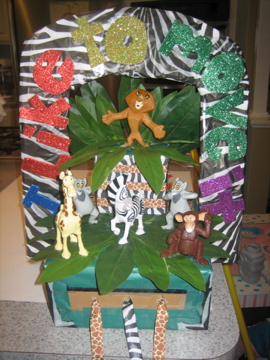 Sure, some people may say the zebra-print arch with “I like to move it” is a little over the top considering that most four-year-olds can’t even read, but to those people I say that you’ve never experienced having your Barbie Island Princess float put to shame by a float that’s pulled by an actual battery-operated horse.

I put my heart, soul, and the tips of my fingers that were burnt by the hot glue gun into that float and I was proud. After all, it would be my only opportunity to put my OCD tendencies on display this year since Caroline’s Kindergarten doesn’t do floats.

Or so I thought.

Two days later Caroline came home from school and I was going through her take home folder. Inside was a note letting parents know that the Fiesta Shoebox Float parade was next Thursday and all floats needed to be turned in by Tuesday, April 21.

I was caught totally unprepared.

There had been no hording of Happy Meal toys, no planning, no envisioning what type of theme would make a great float. How am I supposed to work under those conditions? I asked Caroline what type of float she wanted to make and I could hear the passion in her voice as she said, “I don’t care.”

I scoured our playroom in a desperate attempt to figure out some sort of plan using something we had on hand, but a float with the theme of “Dried-Out Playdough” has been done to death. Finally, I noticed the Little Mermaid Ariel Barbie smirking at me from the top of the Barbie bin. We’ll see who’s smirking after I hot glue her bottom to a shoebox.

Caroline loved the idea of a mermaid float. We went to Michael’s to buy yet more craft supplies and then came home and got to work.

Here is the finished mermaid float. 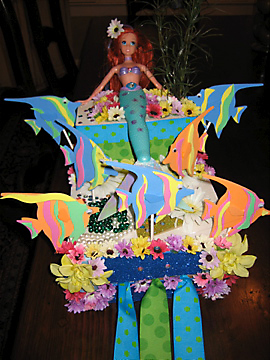 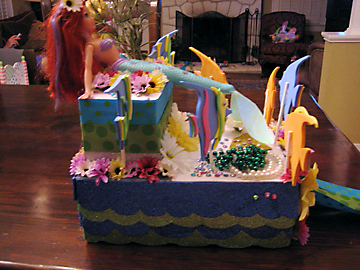 You will notice that Ariel is kind of reclining back on her hands. It’s not that she’s really that relaxed, but rather that I had to hot glue her hands to the float to get her to stay since that big flipper tends to make her a little bottom heavy.

Caroline brought the float to school yesterday and I have to say I struggled with my float pride as I watched her carry it into school until I saw a little girl walking behind her who was carrying a float with an entire log cabin built on top from what appeared to be real wood.

I got to interview one of my all time favorite authors on the podcast this week and when I listened to the finished episode I had a "I can't believe I got to do that!" moment. Thanks for joining us, @BigMama and thanks for getting my Mary Katherine Gallagher reference. 🙂 https://twitter.com/RealHoustonMoms/status/1522222777549443075