Last night I watched Project Runway. This is the first season that I have watched and I only started watching because there is literally nothing else on other than 600 shows dedicated to undiscovered talent in America. My thought is that the majority are probably best left undiscovered. Anyway I am loving Project Runway.

The first thing that caused me some distress last night was when Heidi came out wearing the skinny jean. I am in complete denial about the return of the skinny jean because frankly, they didn’t look that great on me before having a child. It kills me how the fashion powers that be can tell us one year that the bootcut, flare leg, etc. is so much more flattering because it balances out your hips and then the next year want to make us all look like pigs in a blanket on toothpicks. I spent a lot of time in my teens pinchrolling my jeans and if you know what I’m talking about you are probably old and wise enough to agree that skinny legs need to stay out.

The fashion challenge last night involved each contestant having one of those little pocket Britney Spears/Paris Hilton/Jessica Simpson type dogs to use as inspiration to create an outfit for the imaginary owner and for the little dog. The contestants all had their little backstories about the pretend owners but the prize for oddest goes to Angela. She started off designing for a fun-loving British headmistress and ended up designing an outfit for apparently the trashiest camp counselor of all time. Yes she did. Let’s just say that any child attending the pretend camp of this pretend camp counselor probably isn’t going to be learning how to make lanyards.

I am not really a fan of the little dog (or skinny jeans…have I mentioned that?). I have no desire to have a little dog that I carry in a Louis Vuitton bag. There is no reason for my dog to have nicer luggage than I do. We have two blue heelers named Scout and Bruiser neither of whom would fit in any kind of bag but both of whom would love the opportunity to destroy a Louis Vuitton bag. 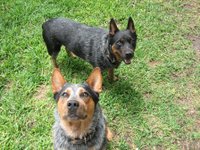 So as I was thinking about dogs last night, because really there isn’t anything on T.V., I started thinking about my friend Jen’s dog. Jen has a lab named Willie. Willie has on at least three occasions gotten so excited by another dog walking by the house that he has jumped through her window to get them. You read that right…JUMPED THROUGH THE WINDOW. The closed, glass window. After the window jumping, Jen then has to walk very fast to catch Willie because in her words “if you run after him he’ll think it’s a game and he’ll never quit running”.

The best part of this, besides the jumping through the window, is that Jen is the person equivalent of Willie. She gets so excited to see the people she loves and while she has never jumped through a window, she has picked me up off my feet while hugging me on more than several occasions. So I guess you could say that Willie and Jen compliment each other very well, but I’m not sure if their fashion tastes are the same.

But we know who Mr. Noodle is…