You are here: Home / Other / Just in case you need a book to read 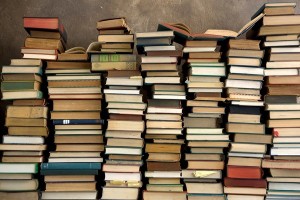 I was talking to Gulley yesterday and we were discussing how many books we’ve managed to read in the last few weeks. I must confess that there may be some pride involved for both of us. We agreed that part of what has been so helpful were all the book suggestions we got from the comments you left a few weeks ago when I asked for a good book to read.

I mentioned this last week but I’ve read Mrs. Poe, What Alice Forgot and Looking For Alaska in the last couple of weeks. I’m in the middle of finishing Mennonite Meets Mr. Right and then I’m planning to read The Husband’s Secret next. I’ve also ordered Roses and Somerset, both by Leila Meacham who happens to be a fellow San Antonio author. A friend recently read both of her books and highly recommended them.

Also, I’m sure many of you are familiar with Goodreads. I have known about it for years but have only recently become a little obsessed. If you’re interested, you can find my bookshelf here to see what books I’ve read and have on my “to read” list.

Anyway, I took the time to compile a list of your suggestions from the comments a few weeks ago. The first twenty or so books on the list are ones that were recommended multiple times and then it’s the ones that were mentioned at least once. I stopped the list at 75 because I need to go to bed and that comes out to more than a book a week for an entire year which seems sufficient.

Finally, (I’ve worn myself out with explanations) there is an asterisk in front of the books I’ve already read and I have to say I enjoyed them all.

Here’s a list that you can file away or put on Pinterest or print out and hang in your laundry room. Whatever works for you. Please keep in mind I haven’t read the majority of these books so I can’t vouch for their greatness, but I’ve learned that y’all rarely steer me wrong. I think there should be something here for everyone no matter what you like to read. All of these should be available through Amazon or Barnes and Noble. I didn’t actually link to them because I don’t have that kind of time or motivation.

*1. What Alice Forgot by Liane Moriarty

2. The Husband’s Secret by Liane Moriarty

4. The Invention of Wings by Sue Monk Kidd

*6. The Language of Flowers by Vanessa Diffenbaugh

*7. The Book Thief by Markus Zusak

8. The Night Circus by Erin Morgenstern

9. The Boys in the Boat: Nine Americans and Their Epic Quest for Gold at the 1936 Berlin Olympics by Daniel James Brown

11. The Kitchen House by Kathleen Grissom

14. The Storyteller by Jodi Picoult

16. The Secret Keeper by Kate Morton

17. Me Before You by JoJo Moyes

18. The One and Only by Emily Giffin

19. Hotel On the Corner of Bitter and Sweet by Jamie Ford

20. The Sweetness at the Bottom of the Pie by Alan Bradley

*23. Glitter and Glue by Kelly Corrigan

24. The Gift of An Ordinary Day by Katrina Kenison

25. Bridge to Haven by Francine Rivers

26. Mark of the Lion Series by Francine Rivers

29. The All You Can Dream Buffet by Barbara O’Neal

30. The House Girl by Tara Conklin

31. And Then I Found You by Patti Callahan Henry

34. A Southern Family by Gail Godwin

35. Through A Glass Darkly by Karleen Koen

37. The Shoemaker’s Wife by Adriana Trigiani

38. All The Light We Cannot See by Anthony Doerr

39. The Art of Hearing Heartbeats by Jan-Philipp Sendker

*40. The Middle Place by Kelly Corrigan

41. Into the Wild by Jon Krakauer

44. Before You Know Kindness by Chris Bohjalian

45. The Girl You Left Behind by JoJo Moyes

47. I Want My MTV: The Uncensored Story of the Music Video Revolution by Rob Tannenbaum & Craig Marks

*49. Is Everyone Hanging Out Without Me? by Mindy Kaling

51. The Almost True Story of Ryan Fisher by Rob Stennett

52. The Aviator’s Wife by Melanie Benjamin

53. The Professor by Robert Bailey

54. The Baker’s Daughter by Sarah McCoy

57. Breaking Night: A Memoir of Forgiveness, Survival, and My Journey From Homeless to Harvard by Liz Murray

59. My Reading Life by Pat Conroy

61. The Century Trilogy by Ken Follet

62. The Walk by Richard Paul Evans

63. And the Mountains Echoed by Khaled Hosseini

64. The Monuments Men: Allied Heroes, Nazi Thieves and The Greatest Treasure Hunt in History by Robert Edsel and Brett Witter

65. The Light Between Oceans by M.L. Steadman

66. Lower Than the Angels by Margaret Symmank

67. I Was Told There’d Be Cake by Sloane Crosley

70. The Patron Saint of Liars by Ann Patchett

73. White Gloves and Collards: A Memoir by Helen Pruden Kaufmann

75. One Thousand White Women: The Journals of May Dodd by Jim Fergus

Please feel free to leave any other can’t miss suggestions in the comments. Happy reading!

Fashion Friday: Edition hotter than the 4th of July

Woke up to 50 like Sally O’Malley today. ⁣ ⁣

This entire thread has both delighted me and served as a cautionary tale.

Also, our second half defense.